Activision  Community Manager, Don Amrich responded back to the angry community of gamers in a recent blog post addressing how this effects the gaming industry as a whole.

Treyarch released a patch for Black Ops 2 recently in attempt to balance out the weapons a little bit more better to try to make the game as fair as possible. In all shooters, there is almost always a “best gun” and especially in Call of Duty. (COD4 had the M16 and MP5, World at War had the Mp40 and M1 Carbine, MW2 had the FA-MAS and UMP-45, Black Ops had the FA-MAS and AK74u, MW3 had the ACR and MP7)

But as far as Black Ops 2 goes, for not even being a fan of COD anymore, I think the one thing that BO2 does is have a really good gun balance, you don’t see many guns that seem too weak that when you play with it that you’re putting yourself at a huge disadvantage. I think this should be credited to the team that has the responsibility of balancing the weapons in the game. A game like Call of Duty, being such a popular game that is played world wide, you will never achieve 100% satisfaction from the community in everything you do in each title and will always have haters, or “trolls” leaving nasty comments or trying to ruin the game in some way, as far as hacking or something.

But Black Ops 2 should really get credit on the awesome gun balancing and far more for all the other work put into the game, but with the recent mass hate mail going to Mr. Vonderhaar, who is in charge of weapon balancing in Black Ops 2, as well as Activision, TreyArch and Call of Duty itself, Don Amrich simply has had enough of the mass amounts of back lash COD gets from the community for everything they do. In Amrich’s blog post he stated,

“One of [Vonderhaar]’s many responsibilities is to keep the game as balanced as possible,” yet when he does make these changes, he “often gets told he should die in a fire or kill himself or is a horrible person. If anyone thinks for a second that this is okay, it is not.”

“But if the loudest voices in the Call of Duty ‘community’ act like an angry mob instead, guess how the entire world views Call of Duty?” Amrich continued. “Now consider that these Internet Tough Guy rants and demands are not unique to COD, but exist everywhere, in many gaming communities. This is why the world often does not take gaming seriously; this is why gamers are assumed to be immature, whiny assh***s. Because the immature, whiny assh***s are louder.”

Don Amrich concluded his blog post by asking the community to have respect to the developers of the games they love playing, whatever game that may be.

I totally agree with Don Amrich on this, the gaming community really has a lot of immature “kids” that go crazy hating and complaining about everything and has really made a name or rather a look to gaming that isn’t very pleasant, with the image of a 12/13 year old with his headset on screaming, raging, or whatever nonsense while at the same time, not being too loud that his mom will hear him, but loud and confident enough to show off or whatever to the people in his game. But you could easily argue both ways in support or favor with Mr. Amrich or against him, being opposing that Activision, TreyArch, Infinity Ward and all the other developers that have a relationship with the Call of Duty franchise has made Call of Duty a disgrace that is highly looked down upon by the gaming community. Even die hard gamers of COD giving hate on the game they spend so much time on.

The companies have exploited the title “Call of Duty” so much that it is CLEAR to the gaming community, they are only in this for the money. The community doesn’t see the passion for “gaming” in the Call of Duty games anymore, you see too much old, and not enough new, or whatever the argument may be. The title “Call of Duty” derived from “the call of duty” associating itself with the pride soldiers had in WW2 to now just a money making annual re-run FPS shooter. So maybe Call of Duty and all the companies and developers associated with them deserve all the criticism they get, weather that be mature or immature criticism. I think the Call of Duty games have lost its meaning, of being all about the game, and all about the money and its just a shame in my opinion and there are good sides for both, putting in so much time and effort into a game to try to make it the best and most perfect game out there rather than a year or two time frame so they can make millions, billions of dollars for a barely new game, but new enough, bringing in cool little gadgets to make the fans satisfied, or close to satisfaction to keep buying.

When Call of Duty games start making actual “new” games that in some way change the way FPS titles are played or experienced, then maybe I’ll give them some slack, how can we take them serious if they don’t take us serious? Sure, they twist that around saying its our immaturity that makes COD and the gaming industry what it is, but they also have to take into consideration that there is now law that makes it illegal for a child or young teen or even an immature adult from playing “Mature” rated titles and accessing the internet to give their feedback of the game. If they don’t take serious developing games to try to make them the best they can possibly be, because they’re more interested in the easy, quick money shoot if they release a game early then they have no right, in my opinion, to be upset with the feedback they get, again, mature or immature. 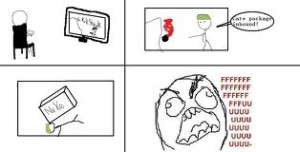 One thought on “Activision’s Response to the COD Trolls”