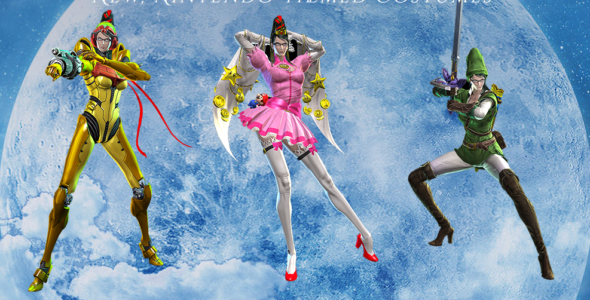 On Nintendo’s show floor at this year’s E3, I was able to get my hands on the surprise Bayonetta 1 port that is headed to the Wii U alongside Bayonetta 2 when it launches this October. When the port was confirmed during the Digital Event, instantly I was curious of how it ran compared to the 360 and PS3 versions of the game.

The demo on the show floor was the same exact segment gamers played in 2010 when Platinum first released the demo of Bayonetta 1. Difference is, is that Nintendo fans were able to play with Bayonetta’s Peach costume this time around. Speaking of which; for those of you who may of thought the costumes were just aesthetics, they’re not. Each outfit (Samus, Peach, and Link) actually offers a different moveset, which essentially offers a different play-style. Peach’s costume offers slower, but stronger individual attacks, and instead of summoning giant hair fists or legs, Bayonetta summons giant Bowser hands and feet. It seems silly, yes, but it’s amusing to see at the same time.

But regarding how the game actually runs, it played and ran extremely well. During regular skirmishes with the angelic beings, I really didn’t notice any dips in the framerate, everything was running butter-smooth. I was able to slide and juke around the battle zone, dispatching foes fluidly without skipping a beat.

Unfortunately though, just like the 360 and PS3 versions, this is not the case with the much bigger boss fights.

During the battle with the giant twin-headed behemoth, the game features the same slow-down that was in the 360 version (and definitely was in the PS3 version, *shudders*). This was extremely disappointing to me, as I always wanted to be able to enjoy Bayonetta’s most epic segments smoothly with no dramatic frame drops, but it seems as if this game will never escape this curse, seeing as how this Wii U version will likely be the last port. Hopefully this is something that can still be ironed out before the game launches, but I doubt it.

That’s not the main problem though. The “but…” in the title of this articles refers directly to the jaggies in this version of the game. Now yes, the last-generation versions of this game didn’t necessarily have perfect AA either, but the jaggs appear to be much larger in number this time around in the Wii U version. Edges were extremely sharp and jagged, and maybe that’d be fine if the game received a nice graphical upgrade, but from what I could tell the actual texture work and lighting haven’t been touched at all. The jaggies are pretty jarring and are essentially on just about everything you see. There’s no way your eyes will be able to not notice them.

I’d say that it’s pretty apparent that this port hasn’t been in development for long and has been rushed in order to get it ready by the time Bayonetta 2 hits store shelves.

But all of that is OK, because the most important aspect is that Wii U owners who may not have owned a PS3 or 360 can now get caught up with the Bayonetta storyline and understand what is going on. That is the most important factor here, and is the reason why the port exists in the first place. It just definitely would’ve been great to see them enhance the game a tad bit using the extra power of the Wii U, but Platinum seems stripped for time.

Leave us your thoughts down below!

5 thoughts on “Bayonetta Runs Smoothest on Wii U, But…”