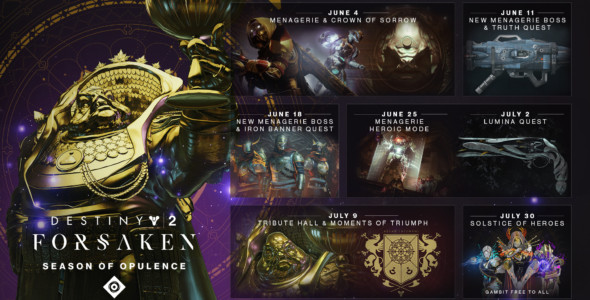 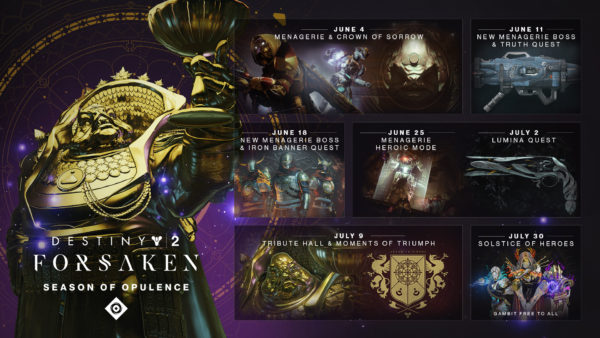 While Season of Opulence doesn’t launch until next week on June 4th, Bungie has already given us the roadmap for what is in store for the players next season.

Starting on June 4, players can engage in the new Menagerie activity, which is a 6 player PvE activity.

On June 18, Iron Banner will return with an all-new questline for players to earn armor. Another Menagerie boss arrives this week as well.

On June 26, Bungie launches the Heroic mode for Menagerie. We do know that the Heroic version will require a premade fireteam rather than on Normal where matchmaking is available.

On July 2, an Exotic quest for the Hand Cannon Lumina will go live. This is likely the weapon that was called “Rose”, that is supposed to be the counterpart to the Exotic hand cannon Thorn.

On July 9, Bungie will unlock the Tribute Hall and Moments of Triumph.

On July 30, players can once again celebrate their achievements with the Solstice of Heroes holiday event.

Now while Bungie has confirmed these dates we can expect some surprises in between the “slower” weeks. A perfect example is the recent Zero Hour mission that launched unannounced and had players finding out about the mission themselves within the game.

We haven’t heard anything from Bungie about what is next after Season of Opulence but we can probably expect to hear something sometime in the summer.

Stay tuned to GaminRealm for updates Bungie and Destiny 2