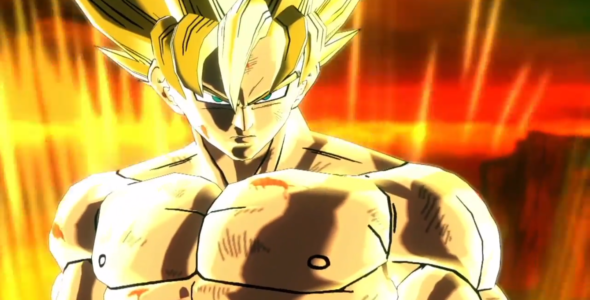 In the E3 trailer for the new game, Dragon Ball Xenoverse, we got a glimpse of what appears to be a new character. 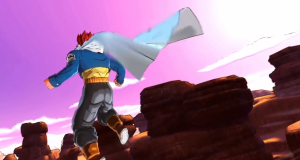 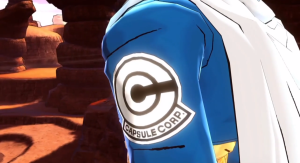 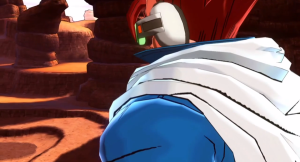 As the back of this person appears at the end of the video, the narrator says:

“A clock that once had stopped, will start to tick again.”

This is pretty intriguing. He’s wearing Trunks’ Capsule Corp jacket, a scouter, a white cape (somewhat like Piccolo’s), and he has red hair. My guess is that this character is Trunks from an alternate universe, since the game is titled “Xenoverse”. This could be a Trunks that ended up becoming a destructive Saiyan with bad intentions, taking on the instinct of his ancestors and the old ways of his father.

What’s curious however, is that this character appeared as Goku and Vegeta were colliding.

Could this be some new type of fusion? It would explain his scouter and red hair (since Goku is in his Kaio-Ken form), but it doesn’t explain the Capsule Corp jacket. I’m going to say it’s probably not a new type of fusion, at least not between Goku and Vegeta.

Another possibility, is that it’s simply a custom character. That’s not nearly as exciting, but it’s completely logical so I won’t rule it out.

I’m sure we’ll get more information relatively soon, since the new movie, Dragon Ball Z: Battle of the Gods, is releasing in North American theaters in just two months. Until then, all we can do is speculate.

Dragon Ball Xenoverse will be available on Playstation 4 and Xbox One.

We’ll be covering more of E3 in the next few days so keep checking in with us.