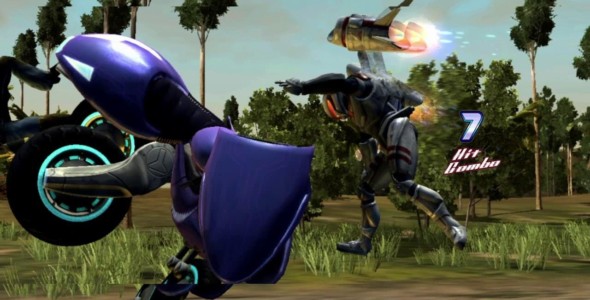 LocoCycle was announced at E3 2012 and after a year a playable demo is featured at this years E3. LocoCycle is a combat vehicle game with an interesting twist to keep it fresh from all the other games like it, such as Twisted Metal. In LocoCycle, you place as ALICE, the motorcycle’s sentient, along with her human driver, Pablo. In the game you race through levels while also completing mid-missions or objectives, for example, you might have to destroy a type of vehicle and if these objectives are not completed, you will not be able to continue on to the next mission. ALICE’s attack features include a front and back wheel punch, running over enemies or knock them into the air, flying. ALICE can also counter attacks and has a turbo function available. When ALICE’s health gets low, the player will have to fix the bike to continue on.