There has been a plethora of games that have been delayed recently and now Bethesda’s upcoming The Evil Within is added to the list. The game was originally going to be launched late August, but the Bethesda team working on the game ask for more time to  “further balance and refine the game in order to deliver the polished, terrifying pure survival horror experience they set out to create.” The game will now be launching on the PlayStation 4, PlayStation 3, Xbox One, Xbox 360 and PC in late October.

For those of you who are not familiar with the Evil Within’s plot here’s a description:

When Detective Sebastian Castellanos and his partners, Joseph Oda and Julie “Kid” Kidman, rush to the scene of a gruesome mass murder, a mysterious, powerful force is lying in wait for them. Witnessing the killing of fellow police officers one after another, Sebastian is then attacked and loses consciousness. Waking up in a land where monsters are wandering about, Sebastian has to fight his way through a world of death and its close friend, madness, in order to understand what’s going on. Sebastian has to face his fears in order to survive on a journey to discover what lies in the shadows of that mysterious force. 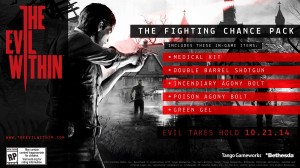 • Medical Kit – A vital health enhancement to enable Sebastian to fight on.
• Green Gel – Used to upgrade Sebastian’s attributes.
• Double Barrel Shotgun and Three Shells – A larger and more formidable shotgun than the regular shotgun, it’s useful for tight situations with multiple encroaching enemies.
• An Incendiary Agony Bolt – Capable of showering nearby enemies with damaging fire sparks.
• A Poison Agony Bolt – Will draw enemies towards it and poison them, allowing Sebastian time for a quick escape.

Even with this delay it is still another title I have under my radar to play. What are your thoughts on the game?

One thought on “The Evil Within Delayed”