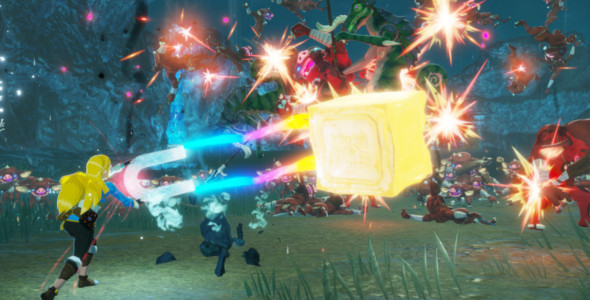 After playing Hyrule Warriors: Age of Calamity demo I must say that this game is one of the best Nintendo Switch exclusive games of 2020.

Now you can delve deeper into the Hyrule featured in The Legend of Zelda: Breath of the Wild – and play as a number of its characters for the first time! Turn back the clock 100 years to the time of the Great Calamity with the Hyrule Warriors: Age of Calamity game, which launches today for the Nintendo Switch family of systems.

Witness the dramatic events of the Great Calamity with a diverse cast of playable characters and action-packed gameplay, and join the epic struggle that once brought Hyrule to its knees. A debut trailer for the game can be viewed here.

Featuring wild combos and over-the-top special abilities, the gameplay of Hyrule Warriors: Age of Calamity is fast-paced and requires on-the-fly deployment of shrewd strategies across evolving battlefields in order to prevail. If you’re a long-time Legend of Zelda fan, Hyrule Warriors: Age of Calamity features a number of playable characters and creatures that have become series favorites, including Impa and the towering Divine Beasts, which are devastating tools in the right hands.

Hyrule Warriors: Age of Calamity offers a new spin on Musou-style games, with several unique additions that bring their own Legend of Zelda flavor. Rods with elemental affinities like fire, ice and lightning will interact with the environment, adding an extra layer of strategy to battles. You’ll also be able to use Sheikah Runes that vary in style between the different playable characters, with iconic abilities such as Cryonis and Magnesis. Make quick work of the hordes descending on Hyrule with these stylish tools at your disposal!

Hyrule Warriors: Age of Calamity is now available at a suggested retail price of $59.99. A free demo is also available in Nintendo eShop on Nintendo Switch and on Nintendo.com. Save data from the demo does carry over to the full version of the game, once purchased. Try out the journey and keep your momentum rolling in the battles raging across Hyrule.