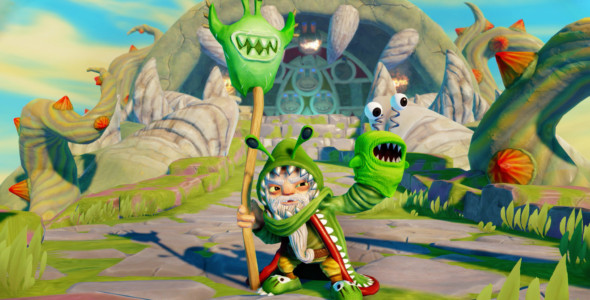 IDW Comics has announced today that they have partnered with Activision to make a comic based on the widely popular game, Skylanders.

The first issue will be a prequel to the Skylanders: Trap Team storyline. The issue, which is written by acclaimed comic book writer Ron Marz with art by Mike Bowden and David Baldeon.
The Skylanders comic book series will be released in October. It will be distributed in the United States, Canada, France, Italy, United Kingdom, Ireland, Germany, Austria, Switzerland, Belgium, Luxembourg, Netherlands, Denmark, Finland, Norway, Sweden, Switzerland, Spain, Portugal, Australia and New Zealand. That list of location alone tells you how widely popular this game really is.

Ashley Maidy, vice president of global licensing and partnerships at Activision had this to say:

We are thrilled to be combining Skylanders, the pioneer of the toys to life video game genre, with IDW, one of the industry’s leading comic-book publishers in the U.S. The comic-book series will offer fans a glimpse into the backstories of their favorite Skylanders characters, expanding on the universe that they’ve embraced so enthusiastically in the franchise’s short history. To explore the world of Skylands beyond the game is an opportunity we know our fans have long been awaiting, and we couldn’t be more excited to see this manifested through a comic series.