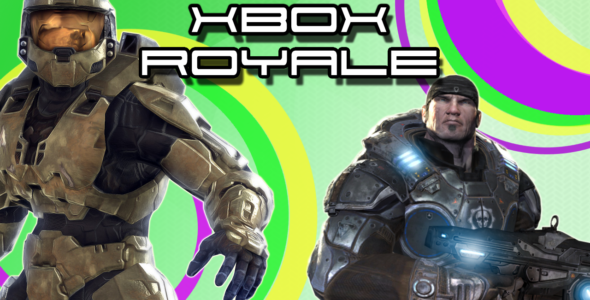 We all know Nintendo’s crossover fighter series Super Smash Bros., and Sony has their recent Playstation All-Stars that launched last year. But what about Microsoft? Xbox fans are still left in the cold when it comes comes to a game series that includes a mash-up of Microsoft-owned stars. So in this article, I would like to propose a sensible roster and discuss some of the moves and supers each individual character would contain.

Master Chief and Marcus Fenix are both no-brainer additions that I don’t really have to get into detail with. Obviously their move-sets will revolve around their arsenals used in their respective games. So let’s go down the list of the other fighters, discussing their movesets and reasons for their inclusions.

Skittles made his first debut at Microsoft’s E3 2010 conference. Alongside the cute-but-overly-corny little girl on the E3 stage demoing Kinectimals, Skittles instantly took the gaming world by storm. Memes engulfed the internet like a flood and the tiger was undoubtedly the best highlight out of all three E3 conferences.

Move-set: Skittle’s move-set will involve the many tricks you can command him to perform via the Kinect sensor bar. Thus, to make it feel like you’re really controlling him, players will not be able to use a gamepad to control Skittles. Instead, the Kinect will be required, and in order to fight others, you’ll have to yell out commands like “Sit! Twirl! Jump! Scratch!”

Super: “Skittles! Skittles Stop Skittles!”, Skittles continuously licks the nearest opponent, tickling him and rendering the opponent completely vulnerable.  On the last lick, Skittles sends the opponent flying off the stage for a K.O.

It’s no secret that the Kinect sensor bar has become an Xbox staple since it launched in 2010.  The peripheral has been the main focus of all of Microsoft’s E3 conferences from E3 2009-2012 with this year’s 2013 conference finally breaking the tradition. Despite the horrible software attach-rate, the Kinect is still a great device for non-gaming related uses.

Move-set: The Kinect itself has no actual move-set. Instead, it stays true to it’s marketing slogan: “YOU are the controller.” The device scans you and the in-game model projects a hologram of you in front of it.  Fighting is simple: Flail your arms and legs like you would in any Kinect game. Although the Kinect has no attacks of it’s own, you can move it, and the player can move it off of a ledge to smash unsuspecting enemies below (have you seen the size of this thing?).

Super: “NSA Raid”, the Kinect detects illegal activities and the stage is swarmed with C.I.A. and FBI agents that proceed to arrest the other characters.

Just like Skittles, Milo also made his first appearance on Microsoft’s E3 stage. Unveiled alongside the Kinect itself, Milo was the main character of what was supposedly a Kinect tech demo that was running in real-time. But after said-conference, Milo was suddenly nowhere to be found. His game was never detailed, talked about, or mentioned.

Move-set: Milo’s attacks would be based off of the boring activities you could do in his tech demo. This includes skipping rocks into enemies’ shins and identifying colors on a sheet of paper. You can also scan real-life objects into the game via Kinect for Milo to throw at foes. The heavier the object you scan, the more damage it will deal.

Super: “Disappearance”, Milo disappears, never to be seen again for the rest of the match.

Probably the only good thing that came out of the Xbox One’s reveal conference was the Call of Duty: Ghosts dog (named Riley). “This is someone you care about.” Boasting high-res fur textures (not really), the CoD Dog would be a perfect addition to the Xbox crossover fighter, especially considering just how popular Call of Duty is with the Xbox audience.

Move-set: He’s a dog. So naturally, he’ll just bite and claw the hell out of other characters.

Super: “Riley, Nooooooo!”, Riley the CoD Dog gets shot and dies, sending the Ghosts Squad into a murderous rampage on the stage. C’mon, we ALL know it’s going to happen.

The Mountain Dew and Doritos brands are synonymous with the Xbox brand. A new shooter is coming out for the 360? Guess where you can find Double XP codes? Mountain Dew caps. Want to earn a few Microsoft points? Load up on bags of Doritos. M&D have been hardcore supporters and partners of Microsoft and the Xbox, so their inclusions would be natural to the roster.

Move-set: Mountain Dew  Doritos will function similarly to the Ice Climbers in the Super Smash Bros. games – you control them both at the same time. You can switch between which one is the lead character (if the other one gets KO’d, it won’t count). Mountain Dew can spill itselft onto the ground making enemies slip and fall, and Doritos can send chips hurling toward enemies, stabbing enemies with their corners.

Super: “Triple XP Weekend”, a countless number of EXP codes come flying into the stage, damaging and and KO’ing any foes that get hit.

Usher became associated with Xbox when he came out on Microsoft’s 2012 E3 conference stage promoting the latest Dance Central game for Kinect. The worst part of his appearance was the fact that there really wasn’t any AAA exclusives present at the event – his performance wouldn’t have been so ridiculous if games had came along with it.

Move-set: Obviously, his moveset will be dance-centric (no pun intended). Spin moves and kicks would make up the majority of his arsenal.

Super: “Scream”, Usher and his back-up singers and dancers start performing “Scream”, singing “oooo baby, baby ooo baby, baby” as they dance across the stage. Anyone who gets hit by a dance move automatically flies off the stage and gets K.O.’d.

Last-but-not-least, we have the man of Xbox himself (well, not anymore), Don Mattrick. He was the lead of the Xbox team for many years and also took the liberty of unveiling the Xbox One. Essentially, it’s hard to think Xbox and not think Don Mattrick. Though most non-Microsoft fans weren’t particularly fond of Mr. Mattrick, he was still an undeniable face of the Xbox brand.

Move-set: Don Mattrick’s abilities will be that of those he posses on-stage. These include awkward walking and un-genuine speeches.

Super: “180-Zynga Combo”, a giant Xbox One hovers down and starts performing 180-degree turns, flying toward enemies in a lock-on fashion. Then Mattrick leaves the stage and Farmville vegetables rain form the sky, finishing off opponents.

So that’s my roster and some move-set ideas for the characters. Was there anyone I missed who should be on this roster? Who do you think should be in a Microsoft crossover fighter? Sound off in the comments down below.

17 thoughts on “[Humor] If Microsoft Had A Crossover Fighter”