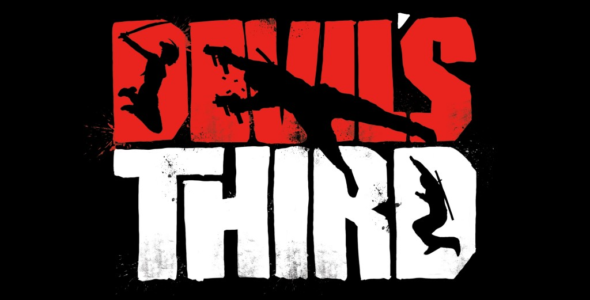 Originally revealed back at E3 2010, Tomonobu Itagaki’s latest project, Devil’s Third, has been on somewhat of an hiatus.  Since it’s reveal, little has been shown or discussed regarding the project.  Most likely, this is due to the fact that originally, THQ was supposed to be supporting and publishing the ambitious title, and as we all know, THQ is unfortunately no more.

Today, the Producer of the Ninja Gaiden and Dead or Alive series made a FaceBook post showing an updated logo for the title and confirming that the game is still alive and well. Itagaki also confirmed that the game will be getting “revealed” later this year, which we could assume would be at or around E3.

“As already announced, we’ll finally reveal ‘Devil’s Third’ this year! You can see that we’ve upgraded our title logo. I wanted to go for the metallic feeling of the Breitling that I love so much. But I don’t really wanna tell you exactly why, sorry ;D”

Last year, we caught wind of a rumor from Nico Wav of French gaming website Gameblog, that an mystery 3rd party exclusive would be hitting this year that is “in the vein of Bayonetta 2”. As we all know with Bayonetta 2, Platinum Games had started on the project a long time ago but SEGA refused to publish it, so Nintendo came along and saved the game while securing it as an exclusive title for Wii U. Devil’s Third totally fits ‘in the vein of Bayonetta 2’, as the game was forcibly dropped by it’s now-deceased publisher last year.

Now, Wav did say that this title was an unknown game, which would lead one to think that it wouldn’t be Devil’s Third, but I do find it odd how Itagaki stated that they would “reveal ‘Devil’s Third'” this year. Hasn’t the title already been revealed? Chances are, it could have been a tentative title for the game, or, more accurately, Nintendo asked him to change the title as I’m sure they wouldn’t publish a game with the word “Devil” in it. So maybe it’s under a different name now, making it “unknown”.

At the end of the day this is all speculation of course, but it’s an educated guess. What do you think? Would you care if ‘Devil’s Third’ was a Wii U exclusive? Were you ever looking forward to it? Leave us your thoughts down below.

7 thoughts on “Itagaki’s Devil’s Third – A Wii U Exclusive?”