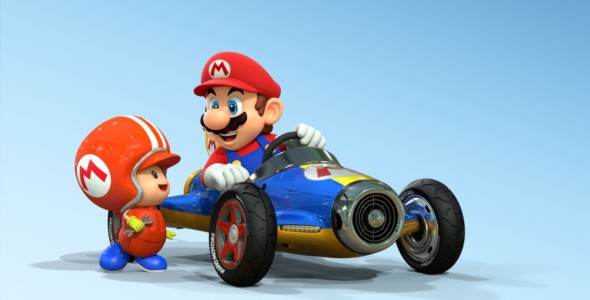 I went to the Mario Kart 8 preview event at Gamestop today, and I figured I’d give my thoughts on the game based off what I’ve played so far. I won’t go into too much detail since a full review will be posted on the site soon.

The game was really awesome. As I’m sure you’ve all seen by the gameplay footage that has been shown, the visuals are beautiful. They’re possibly the best visuals on the Wii U so far, next to Super Mario 3D World. The gliding portions are especially captivating in HD. The gameplay was a blast and as someone who hasn’t played Mario Kart 7, I really enjoyed experimenting with kart configuration and character selection. I’m looking forward to unlocking the additional content when i purchase the game for myself. The one complaint I had was that the pacing felt a bit slow at times, but not always. This may have been because of the kart I chose, the track I chose, or because I’m used to playing Mario Kart Wii with a Wii remote as opposed to the Wii U gamepad. I didn’t get quite enough time to make a solid judgement on that, so I’ll just chalk it up to happenstance for now.

All in all, it’s Mario Kart and Mario Kart games are always fun. Now that it’s on a next-gen console, we’ll be able to race against people all over the world in full fledged HD glory. If you own a Wii U, I definitely recommend pre-ordering this game ASAP, especially since it’s the only a major Wii U exclusive so far where we can compete with people online.

Be sure to keep up with the site for the full review!