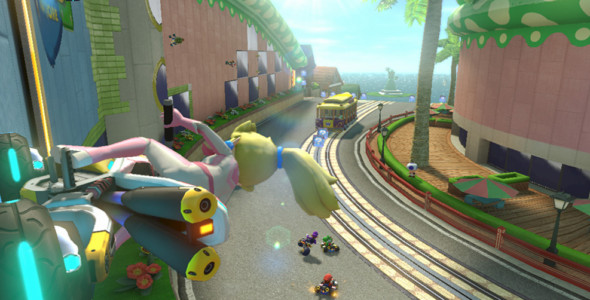 The next Mario Kart game has finally been unveiled. Titled ‘Mario Kart 8’, this next installment in the series will feature an anti-gravity mechanic, 60 frames-per-second, and will be launching in 2014.

Little details were given about the actual game, but Nintendo announced an app that will come with the game called “Mario Kart TV” that will allow users to record highlights from racers and actually share them on the Miiverse (something Nintendo left out of the Direct for some strange reason.)

Graphically the game looks pretty damn crisp and clean, and runs butter-smooth. Strangely enough, at least in my eyes, the game looks better than the newly announced ‘Super Mario 3D World’, which is definitely a backwards thing. You can view the reveal trailer of Mario Kart 8 here.

These are all the details given so far, but check back into GaminRealm for future updates.