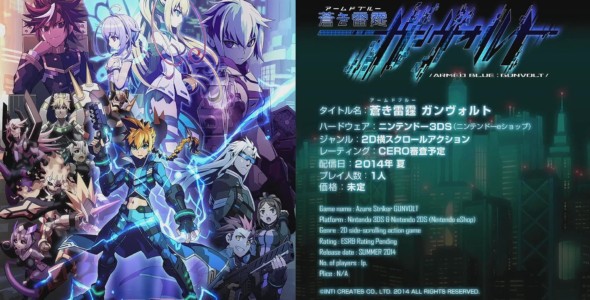 I’m back early from surgery recovery! I’m here to report that Mighty No.9 isn’t the only game Keiji Inafune is working on. The Megaman co-creator announced that he and his team will be also working on a second platformer which is in the style of Megaman X. It’s completely different from Mighty No.9. It’s not crowd-funded, and it’s only for the 3DS digitally. The game is called Azure Striker Gunvolt. The gameplay as you can see in the trailer is that of the platform/run n gun style of Megaman X and the Megaman ZX games which ranged from “Decent” to “Are you kidding me? They actually released this?”

I’m excited as a 3DS owner and a fan of Megaman. But I’m not super excited 100% because once the existence of this game gets out, this will be another opportunity for snarky commenters to combine their rage and ignorance and start saying thing like how this game is making Capcom look bad, or how Capcom employees must be committing suicide because Keiji Inafune has one small game coming out. I’m sick of angry fanboys exclaiming that maybe if Megaman came out Capcom wouldn’t have been in this financially slump there were in to begin with. I guess I shouldn’t be too fed up, Capcom stuck to their guns, got rid of what wasn’t working, kept listening to their fans contrary to popular belief that they don’t. Released Monster Hunter 4 in Japan and made a profit.

Yeah, I’m sure Keiji’s one small game is going to outshine Monster Hunter 4 and Ultra Street Fighter 4 and I guess Deep Down.

Here is the game’s Trailer:

The game is set to be released this summer and here is the link to the game’s official website Hope you can read Japanese: http://www.gunvolt.com/