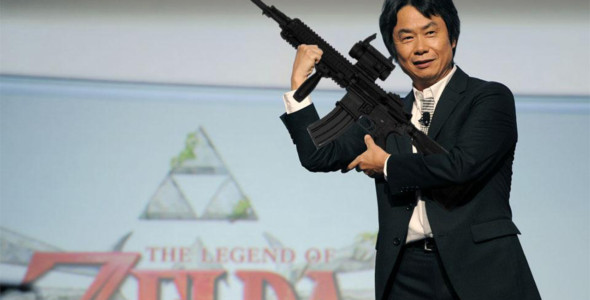 We’ve known for a long while now that Miyamoto has been working on a brand new IP for Wii U, but we finally have an update regarding his secret project. In an interview with Japanese magazine Famitsu, Miyamoto reassured us that his new project will not be part of an existing Nintendo franchise:

“With Mario Kart 8 coming out in the Spring of next year, we’ll have a good selection [of Wii U games] available, so I’m thinking isn’t it about time we release a new franchise?” reads the quote. Famitsu’s follow-up question – “A new franchise! Would that a be brand new title that you would be working on?” – garnered the following response: “I can’t talk too much detail right now, but I will say that this new title has been keeping me busy lately.”

The first time we caught wind of this game was back in January 2012, where Mr. Miyamoto revealed to associated press that he was working on a brand new IP for Wii U which he described as a “undisclosed original title.”

What could this secret project possible be? Who knows, but Miyamoto has stated in the past that he “kinda want[s] to make a first person shooter.” Knowing this man, his new IP for Wii U could be pretty anything, but one thing is for certain, and that’s that it’ll be a unique, quality game.

6 thoughts on “Miyamoto Teases New IP for Wii U”