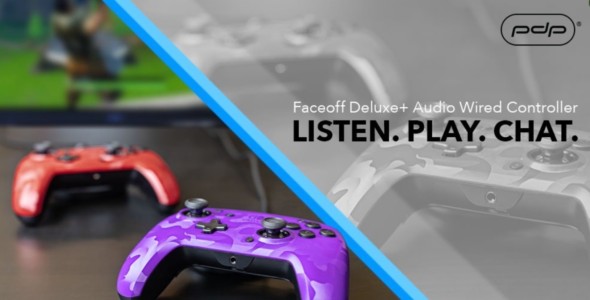 This Controller is going to be a game changer for the Nintendo Switch, currently switch has no controller with this built in feature. Native chat support is a must for Switch with companies like Discord and Vivox Working with third party developers to implement a SDK for switch online games . The future looks bright for Nintendo Online chat support.

Whether you’ve been waiting since the release of the Nintendo SwitchTM or since we first announced the FaceoffTM Deluxe+ Audio Wired Controller, starting today you can finally pre-order a Pro Controller that supports game audio and integrated in-game chat.

The built-in 3.5mm audio jack on the Faceoff Deluxe+ Audio Wired Controller features support for audio on every title plus integrated in-game chat for those that offer it, like Fortnite*. No more worrying about waking up the kids, or having your parents yell that your game is too loud! Simply plug in your go-to headset and begin taking down enemies while commanding your team at the same time. Untangle yourself from the current chat solutions and pre-order this new innovative controller!

Just like our existing line of Faceoff Controllers, the new Deluxe+ Audio Wired Controller allows you to swap out and snap in different faceplates with our unique interchangeable design! Have our older Faceoff Nintendo Switch Controllers? You can take your favorite faceplates from them and use it on this new version – whether it be MarioTM, LuigiTM, YoshiTM, Super Star Mario, Super Mushroom, The Legend of ZeldaTM: Breath of the Wild, or Black and Blue Camo faceplates.

If you don’t own any of our existing Faceoff controllers with these faceplates, or just want new ones, you’re in luck! New Faceoff Mod Kits will be available soon on pdp.com, and include individual faceplates that feature iconic artwork from some of your favorite games. Customize the new Faceoff Deluxe+ Audio Wired Controller with the look you want!

You can further customize your gameplay with the dual programmable paddle-style back buttons on the Faceoff Deluxe+ Audio Wired Controller, which allow you to remap any other button on the controller. Quickly and efficiently get access to jump, swap weapons, or any other essential functions you need to enhance the way you play.

The Faceoff Deluxe+ Audio Wired Controller also lets you adjust the volume without having to exit your game! Simply hold the function button located by the right analog stick, and then use the “up” and “down” buttons on the D-pad. On top of that, you can instantly mute your mic by double tapping the function button.

Each controller is officially licensed by Nintendo®, has a 10-foot fixed USB cable for maximum reach, and offers responsive low-friction analog sticks.

The Faceoff Deluxe+ Audio Wired Controller will be the first of its kind in the market when it officially releases on July 22 for MSRP $24.99, and is available now for pre-order in Black Camo, Blue Camo, Purple Camo, and Red Camo on pdp.com and Amazon. The Blue Camo design is also available for pre-order online at Best Buy Canada. Source
https://www.pdp.com/blog