Australia received their first ever Nintendo Direct today and it was revealed that the New Nintendo 3DS, that was announced last month, will be hitting stores there on November 21, a little over a month after the October 11 release in Japan. 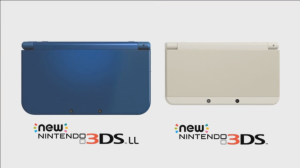 Nintendo also noted that they have no plans of bringing the handheld to Europe or North America this year, so it looks like we’ll have to wait until 2015. Unfortunate news for fellow Smash fans craving a c-stick.

The New Nintendo 3DS will run for the suggested retail price of A$219.95, while the New Nintendo 3DS XL will be A$249.95. That comes to 195.29 and 221.93 US dollars respectively. AC adapters will not be included, but the devices will be compatible with previous Nintendo 3DS and Nintendo DS adapters.

Are you planning on purchasing these revised systems?