Nintendo held their Nintendo Direct today and there is plenty of news to cover. Here is a brief look at what the big N showed today:

Nintendo started off the show in an extremely positive manner by showing off a trailer of a new Fire Emblem game for the Nintendo 3DS. The game’s development will be in the hands of Intelligent Systems, the team behind the critically acclaimed Fire Emblem: Awakening. While the details of the game are still under wraps for the most part, we know that the game will feature a decision making mechanic which will affect what happens in the game world, this is something relatively foreign for a Nintendo game. Nintendo also confirmed that Majora’s Mask 3D will be arriving on February 13th. 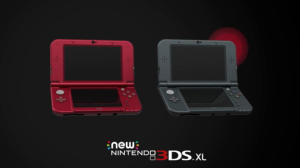 Nintendo also showed off the New 3DS, which will be arriving to the States on February 13, 2015. It will be available in two color variations, “New Red” and “New Black”. Along with the standard colors, a special, silver, Monster Hunter 4: Ultimate 3DS bundle will also be available as well as a Majora’s Mask themed New 3DS in a gold coloration. It is important to note that these systems will not come with an AC adapter, so if you don’t already have one from a DSi or 3DS, you will need to purchase one separately. Also if you were planning on purchasing the standard sized New 3DS, with the swappable faceplates, you might be disappointed; as of now Nintendo is only releasing the New 3DS XL model.

Metroid Prime: Trilogy for 10 bucks? Count me in.

On the Wii U side of things Nintendo provided information on Splatoon, Hyrule Warriors Majora’s Mask DLC, Kirby and the Rainbow Curse, and Xenoblade Chronicles X. Nintendo also announced that Wii games are on the way to the Wii U, infact, starting today, we are now able to purchase Wii games via the Nintendo eShop. This means the games will appear on the Wii U menu without having to go to Wii Mode. The first game that will be available to download is Mario Galaxy 2. The next two games are Punch-Out!!, which is available January 22, and Metroid Prime:Trilogy which comes out January 29. Each game will launch at a price of $9.99 during the first week they are available. After that they will be $19.99. I think this is a huge step for Nintendo, hopefully we start seeing GameCube games soon.

Nintendo also announced the next line of amiibo figurines. The list includes: Robin, Lucina, PAC-MAN, Wario, Ness, and Charizard. I would strongly recommend pre-ordering these to avoid missing out on a character you want.

Overall this Nintendo Direct was really good. While there is more focus on the Wii U now than there was in the beginning of its lifecycle, Nintendo is clearly pinning their hopes on the New 3DS right now. That being said, there is a lot to look forward to this year if you are a Nintendo gamer, the future of both Nintendo platforms is looking bright.

One thought on “Nintendo Direct Coverage”