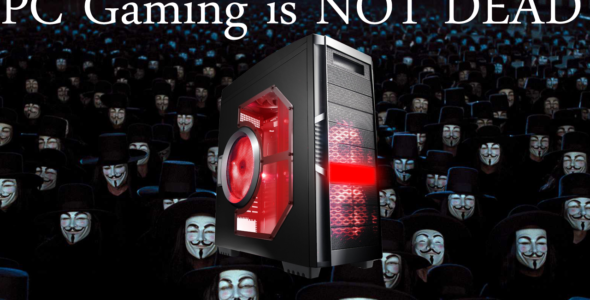 I first want to disclose the fact that I am not a PC Fan boy. Sure most of my gaming is done on PC, and that’s 98% of my gaming and needless to say I do prefer PC Gaming over any other form of gaming. Including Handhelds, and console gaming. There are an influx of articles popping up in numerous websites stating that PC Gaming is dead. If anyone can explain any fact in this that would be much appreciated. I’m here to disprove these articles and I will present my statements with facts and statistics. Before I continue I will say I am in no way, shape, or form against console gaming. I’m actually more so looking for a world and wishing that we PC Gamer’s and Console Gamer’s come together because at the end of the day we are all Gamer’s and we are no different than one another. We enjoy and marvel being sent to other worlds for hours on in, experiencing situations that would either be impossible in real life or you dare not attempt in real life. We can push to this world, in which there are no Fan boys because that is the healthiest outcome in gaming and it is our future.

PC GAMING IS NOT DEAD

After first hearing about it while GaminRealm was in the middle of a podcast, I went online and did an ultra search. (Ultra Search: 3-4 hours of googling) After my spiritual journey on Google I came to a revelation. People on the internet are gullible, how gullible? These “PC GAMING IS DEAD” Articles on the internet have comments that are simply a product of mass delusion and confusion. “HAHA I Knew it. PS4 FTW! PC gaming will die like your entire family will.” Comments like this one disgust me. Not only is he completely wrong in his statement but placing someones family he doesn’t even know in the crossfires is just wrong. This is the world we live in though, if it’s not a Playstation than it is nothing, if it’s not an Xbox than it is nothing, and the same goes to PC gamers and I will say this because these are the people I deal with the most. I’ll say that about 89% of PC gamers I’ve met are PC fanboys and will defend the platform till death do em part. Then there is a small 11% that are the most modest people you meet. Not only do they commend console gaming as what it is, an easy form and quick portal to the world of gaming, but they also see a world in which we all consider ourselves just Gamers and not only proprietary to your home platform.

HOW PC GAMING IS BEING KEPT ALIVE

First there are titles like The Sims, the most successful PC franchise of all time. On top of that there are games that simply can’t be played on Consoles, and that’s “most” RTS Games. Not to mention most of Professional Gaming and E-Sports is made up of PC Games and Gamer’s. I will also say that there are over 1 billion PC Gamer’s in the world, that’s a large number of Gamer’s. That makes more PC Gamer’s than all Console Gamer’s combined. In fact that makes up about most of our population, as there are a little over 7 billion people on earth. In other words PC Gaming is being kept alive by part of the worlds population and with services and platforms like Steam that’s only fueling our fire even more. In my Best Buy alone, there’s an average of 2-3 people a day purchasing gaming PC’s. Computers that range 700-1,000 bucks. Even with Console Gaming being more affordable and accessible to more people, people just can’t get enough of PC Gaming but why exactly is that?

The Personal Computer, and why people prefer this platform to game on as opposed to consoles.

1. Is it the ability to alt-tab out of your game and multitask at an infinite level? Whether your waiting for your respawn or even sick of the current song that’s playing on Spotify. Simply alt-tab and your Gaming platform is now your Personal Computer unbarred from anything. The entire system and internet is available even while playing a game.

2. The ability to stay up-to-date with current tech and specs. Tired of your 660ti Graphics Card? Well no problem, upgrade to the new GTX 760. How hard is it? Simply unlatch the old one and click the new one in. Your Optical Drive not reading discs anymore? No problem. Simply go to any retail store that sells components and purchase yourself a nice 27 dollar optical drive and simply hook it up to your PC. There is no need to purchase a new computer to upgrade. Every component can be upgraded.

3. STEAM. With amazing sales, Steam has proven that gaming is affordable. With 60 dollar games dropping to 20 or even 15 bucks. There is no better service than what is provided on Steam. Luckily steam had Dead Pool at $39.99 and not its $60 price otherwise I would’ve yanked my hair out.

Anyone who uses the word dead in the same sentence as PC clearly doesn’t know the definition of the word. In order for something to be dead, not a single part of it can be alive. So until there isn’t a single living PC Gamer, the platform won’t be dead.

2 thoughts on “PC Gaming is Not Dead”