Pikmin 3 is selling very well, according to Taketo Matsuo, Director of the Game Rental Planning Group at Japanese retailer Tsutaya. So well, in fact, that it’s driving the hardware sales as well:

“Pikmin 3, that came out nine years after Pikmin 2, is having a really good start. Sales at Tsutaya are comparable to the release of Super Mario Bros U and have driven greater sales of Wii U units.”

This is of course, great news considering just how well the New Super Mario Bros. games sell. And just to put things into perspective, NSMBU sold 163,528 copies in its opening week on the market, which is crazy-good. 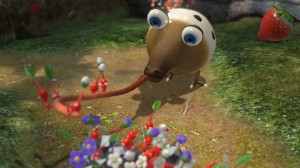 It’s also good to see that there are actually North American ads for the game (amazing, right?! Nintendo is  actually doing some marketing!). Could Pikmin 3 have a similar effect in the West than it has in Japan? We’ll have to wait and see, but regardless, Nintendo fans will finally be getting their first AAA Nintendo title for Wii U.