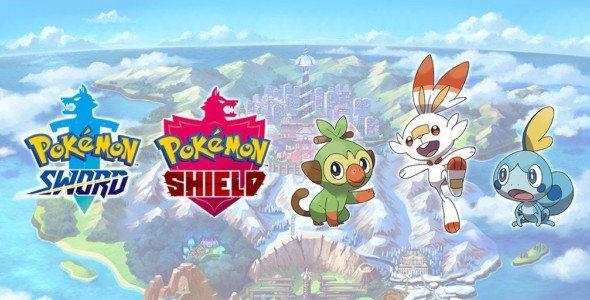 Skip to the 28:36 mark on the video to begin the presentation.

Pokemon Sword and Pokemon Shield was shown in more detail just a few minutes ago worldwide. My honest review and opinion may differ in comparison to you, but I will start off by saying that Pokemon Sword and Shield looks great. I did enjoy having a different view of the open world and the idea that this game may be open world exploration. Let’s discuss the highlights I’ve noticed that Game Freak is delivering to our Switches.

Dynamax Pokemon are new to the main series lineup of games and this new ability in Pokemon brings big apparent changes. The Dynamax ability only lasts for three turns and the moves that the Pokemon already know will be intensified. You also will only be able to catch certain Pokemon in the Wild after battling their Dynamax form, but we’ll dive more into that later.

Pokemon Gyms are BACK!

I’m super excited for the return of Pokemon Gyms in the main series games. Pokemon Sun and Moon took a change in the way of Alolan Captains. I also like how the stadiums that you participate in will resemble the anime in terms of battling in an actual stadium. Dynamax Pokemon will be used apparently pretty early on in the game, so I’m sure there’s some charm that is required or it’s attained by level-up. Most likely it will be a side mission or a held item.

There’s an announcement of a Wild Area, which is one large region of grass, water and open fields and the Pokemon seen will vary depending on the time and weather. What’s great about this feature is hints of time change and weather effects are back. Also there is a mention of real time events by watching it the first time. Paraphrasing their statement, there will always be something new for you to experience. So I hope that’s what that means. During the live presentation, I saw Rhydon, Butterfree and Milotic and I wonder are all Pokemon going to be visible in the wild like Pokemon Let’s Go Pikachu and Let’s Go Eevee spoiled us to.

This is the part in the live direct that I see where Game Freak planned to intertwine the Core Series fans with the Pokemon Go community. Dynamax Raid Battles is self-explanatory speaking, you are battling against Dynamax Pokemon. You can link up with a team of four trainers and battle the Dynamax Pokemon and one of the trainers per battle can use one of their Pokemon to become Dynamax as well. Strategy is key in this Raid Battle. I’m definitely enjoying the creativity that was brought to this Raid Battle formula.

The date wasn’t specific about this but there’s a Pokemon Sword and Shield Bundle that will be available. Most likely sometime this week or next month.

I wrote earlier on last month that I would not be upset if Pokemon Sword and Shield was to get a delay and I’m still on the same stance. I enjoyed what I’ve seen, but I’m not entirely blown away by the game either. Although I will still end up buying the Sword Edition, I can’t help but wonder why it feels like a Sun and Moon game engine port. This franchise has come a long way from 1995 and has become Nintendo’s most successful franchise, yet Pokemon has never been in the running for Game of the Year. One has to wonder, when will Pokemon’s time come to be awarded (insert best-in-something award). I’m still waiting and the pieces that are needed to possibly make Pokemon a GOTY nominee is for another article, for another day.

Did you like and enjoy the Pokemon Direct? Were you not as interested after seeing Dynamax form? Let us know in the comments below

Stay tuned to GaminRealm.com for more coverage of Pokemon Sword and Pokemon Shield.