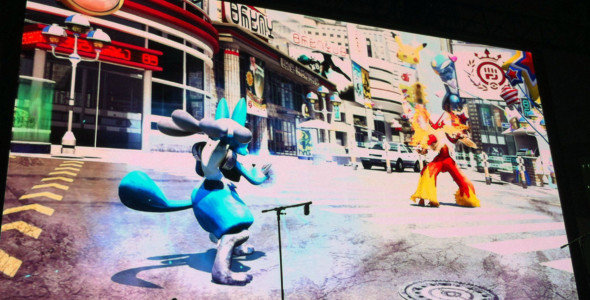 Pokemon Wii U may be headed our way sooner than we previously suspected.

The screenshot you see above is of a short clip that was shown at the end of a Pokemon X & Y hype trailer – which was shown at the Pokemon Game Show yesterday – showing  Lucario and Blazikan facing off in what looks like a virtual Tokyo. Obviously, the game’s visuals look too good to be on 3DS hardware, so clearly this is something for the Wii U system. But will this be another stadium-style game?

Based off the footage, it seems so. The way the camera is revolving around the two combatants is definitely reminiscent of previous Stadium games.

But I feel that Nintendo needs to go beyond the typical stadium formula. What they have here is a rare opportunity to take console Pokemon to the next level. Nintendo has the hardware now to make a convincing and beautiful open-world game, and they also have a dedicated network to implement unique online elements. Now, I’m not saying that Pokemon Wii U has to be the MMO-style game that essentially every gamer out there has been begging for (though that’d be freakin’ awesome), but for the Wii U’s sake, evolving the stadium formula would naturally do the system a lot more good than it would being the standard console Pokemon experience we’ve had for years now.

Wouldn’t it be great to have a console Pokemon experience that isn’t reliant on the handheld games? Imagine being able to free-roam and capture all kinds of Pokemon in beautiful HD environments. I suppose you could say my idea of what this game should be is akin to the MMO idea gamers have created, except without the massive-mulitplayer part. Essentially, it would be just like the handheld series games, just in a full 3D space with an adjustable camera.

Now, that’s not to say that the game should be without it’s multiplayer. Nintendo should allow players to be able to sync their worlds so that they can battle and travel together. Imagine players on your friends list being able to hop into your world (or you, theirs), riding around on bikes and doing tag-team battles against wild Pokemon and A.I. trainers. And then of course, there would be your standard vs. mode where you can simply battle your team of Pokemon against another’s.

And don’t forget about Miiverse and Miiverse integration. In a similar fashion to Pikmin 3, players should be able to take out a camera (obviously controlled through the gamepad screen) to take pictures of wild Pokemon and submit them to the Pokemon Wii U community. Not only would this be a great community feature, but it would also fulfill the Pokemon Snap HD role that I’ve seen many fans asking Nintendo for. Then, statuses of your friends in their own games or your world will pop up as on-screen notifications. It’d be insanely hilarious to be walking around in the grass looking for a particular Pokemon and then all the sudden a notification pops up saying, “MiiGuy’s Bulbasaur just got Hyper Beamed and fainted.” Players would also be able to leave messages for each other at A.I. trainers, gyms, and Pokemon centers (ex: “This guy’s Lickatongue is a b****!!”).

Then there’s the Wii U GamePad. The GamePad would serve as the perfect tool for managing and navigating the game. See your inventory of items and current Pokemon on the touchscreen, view an cave map that updates as you explore it, and locate where the Pokemon Center and Gym is in the current town. Naturally, the GamePad would also serve as a Pokedex, where you can look up information of any Pokemon in the database.

I know a lot you may be saying, “Well, all of this would be perfect for an MMO, so you might as well be asking for that”, but the reason why I’m saying this game doesn’t have to be an MMO is because obviously that type of game would require tons of development time and resources – time that Nintendo doesn’t currently have at the moment. The company is already behind on development as-is with their current Wii U games, so I highly doubt they’d want to undertake such a huge project at this point-in-time. And although an MMO-style Pokemon game would pretty much guarantee that the Wii U will sell 300 million units, even a more single-player based open-world game like I just described in this article would get the Wii U truly flying off shelves.

Pokemon Wii U being a standard run-of-the-mill stadium game would still rack in some sales regardless, sure. But I feel that if it is, it’ll be a huge missed opportunity for Nintendo to have achieved something truly amazing and unique. The company needs a Pokemon Wii U title that will take people’s lives away, not a game that will simply move a pretty good amount of units.

What do you guys think? Share your thoughts and what this game should/might be down below!