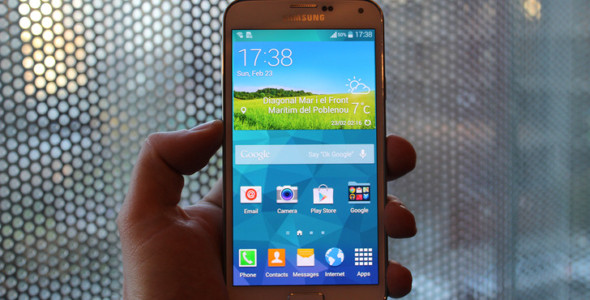 Today in Barcelona, Samsung has revealed (to the surprise of no one) their all new smartphone in the Galaxy S5. Let’s get to brass tacks here. The Samsung Galaxy S5 will be released to 150 countries (US included) on April 11th of this year so, the wait won’t be long. As it’s a smartphone there are two ways to get it. Over here in the US, it’ll be available on Sprint, AT&T, T-Mobile, Verizon Wireless, MetroPCS and U.S. Cellular if you want to set up a phone plan with them or if you’re like me and don’t want to deal with these retailers, you could always go to Amazon, Best Buy, Costco, RadioShack, Sam’s Club, Target and Walmart for your own. But at time of writing no price point has been announced.

It’s packing improved camera capabilities, a new design, a fingerprint scanner, fitness tracking capabilities. It seems to be an upgraded model from the previous version aka the Galaxy S4. So, what exactly is different?

1) The screen size has been increased slightly to a 5.1″ FHD Super AMOLED 1080p display.

2) The built-in camera sensor has been increased from 13-megapixels to 16-megapixels. Supposedly it has the “world’s fastest autofocus” of 0.3 seconds and it also has a faster HDR performance and added depth of field effects but in no way is it better than a dedicated HD camera. It’s like what the Xbox One/PS4 are compared to PCs.

3) Its Wi-Fi specs are as follows: It has the latest Wi-Fi standard, 802.11ac, as well as 2X2 MIMO and expanded LTE support. It has a Samsung Galaxy exclusive feature called a “Download Booster” it balances both Wi-Fi and LTE to in able to increase the transfer speeds.

4) Memory wise it uses an unspecified 2.5GHz quad-core processor, 2GBs of RAM, and prepackaged with Android 4.4.2 Kit Kat. It comes in both 16GB and 32GB of memory but they both can be expanded on up to 128GB of memory if you have an SD card.

5) Its battery capability has also been increased to 10 hours of web browsing and 12 hours of video playback in one go. The best part is if you are running low on power on the 11th hour of video playback, it will activate a new “ultra -power-saving mode” by making the screen black-and-white and turning off all the non-essential services on your phone. Even better, Samsung says if you put your phone in standby mode with only 10 percent of the battery left, it will still last “up to 24 hours” before running out of juice.