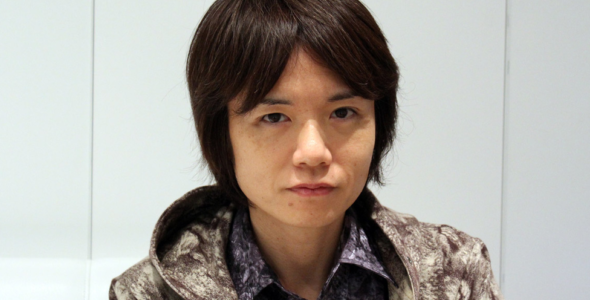 For those of you who may not know, during the days before Super Smash Bros. Brawl’s release, series creator and director Masahiro Sakurai provided information on the game via the Smash Dojo, a website created for the sole purpose of releasing daily information directly to the fans. To be frank, the site was simply an amazing fan service. Sakurai posted daily updates of juicy information, making each morning for Smash players essentially Christmas.

After Super Smash Bros. for Wii U and 3DS was revealed, Sakurai informed fans that they will be receiving Smash 4 updates via the official Miiverse community in the Dojo’s stead. Most gamers were slightly disappointed that we wouldn’t have a flashy, organized site to visit, but outside of that, everyone was still ecstatic and anticipated the same kind of savory updates we received in the past.

Boy, were we wrong. I’ll be quick and straight to the point: The Miiverse updates suck.

I mean no disrespect Mr. Sakurai with this article. As an avid Smash fan myself, I naturally understand just how much he works himself to near death with these Smash games. But with that being said, a large portion of the updates he has given us thus far are empty of any real meaning or information. The whole point of the Smash Dojo was not only to provide info on the game, but it was also created to serve as a hype-builder. Currently, the Miiverse updates are often failing the first task, and completely failing at accomplishing the latter.

It’s not that Sakurai needs to add to his work, or do more work. I’m simply saying that the updates he does need to be more meaningful. Too many times have Smash fans been disappointed to see that the latest “update” isn’t really an update at all. The term “update” infers that there’s new information to be shed on the game. Sakurai is constantly posting new posts that make me literally and audibly say,  “O.K……..?”.

But don’t take my word for it. I went and captured a few examples of what I mean: 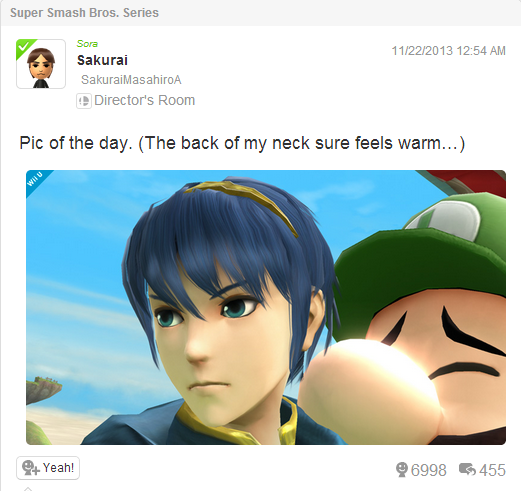 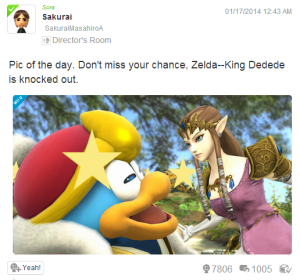 Even the most avid Sakurai defenders cannot deny the utter silliness of these updates. Instead of telling us something new about the game, they serve as a chuckle-rouser for the little kiddos on Miiverse. I know some may say that “this is only two pictures though”. Alright then, let’s show some more, shall we? 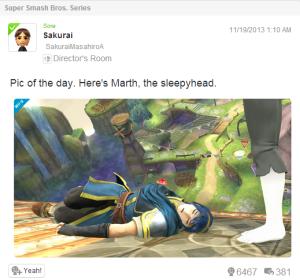 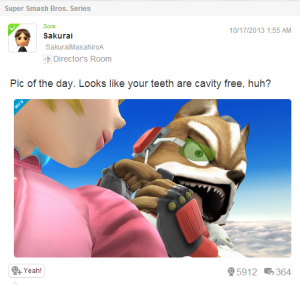 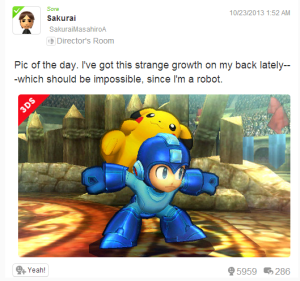 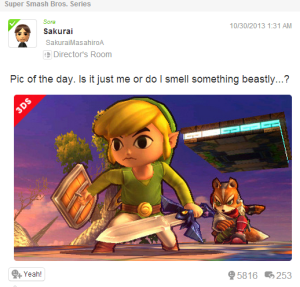 Now, what kind of informal value do these “updates” hold? That’s the thing – none at all. Anybody who has played all the Smash games can tell you that while the base formula is always kept intact, each games still manages to feel and play differently than the last. Smash 64 was one of the slower Smashes, but had the most hit-stun out of any of the games in the series and introduced the concept of L-Cancelling. Melee kept all of the mechanics of 64 but upped the ante 10-fold, sporting the fastest speed and most technical gameplay out of all of them. Brawl was purposely made to slow everything down dramatically, make things less technical, and focus on a more balanced roster for casuals and newcomers.

What do we know about Super Smash Bros. 4 though? Outside of the information that given to us during the game’s reveal (no tripping, no wavedashing, faster- than-Brawl), we know almost nothing about the changes being made in this installment. Sakurai has offered very few “updates” that actually explain what separates this iteration from the older ones. But I showed you the kind of updates deem pointless and inadequate, so now let me post a couple of examples of what kind of real updates we should be getting so we better understand the product that we plan on buying. 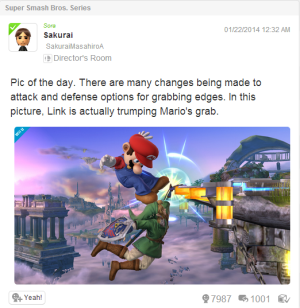 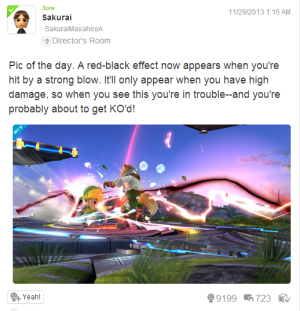 Of course, updates that contain new stages, items, and especially characters are more than welcome, as well as new or altered moves. But the pacing of these things thus far have been terrible, and often times when a stage has been “shown”, it’s sometimes just a portion of it rather than a picture of the whole thing. The Dojo rarely disappointed, if ever at all. Going off of my memory, essentially every single update was about an actual new feature in the game. Every morning we woke up, we could rest assured that we would receive new information, whether it was a new item, mechanic, stage, or game mode.

Speaking of game modes, there hasn’t been a single new addition announced for Smash 4 yet. What new game types will we be able to experience? After over half-a-year, we still don’t know yet. And what about the features? Will the Stage Builder return? Will we be able to record matches again, and possibly upload them to Miiverse (hint, hint, Sakurai)? We don’t have a single detail about the online yet. Heck, we haven’t even seen a screen shot of the menu(s) yet. The Dojo never had any of these problems. 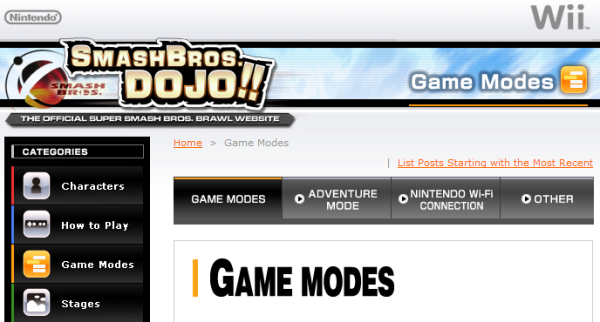 Ah, Dojo. How awesome you were. We miss you so.

Another problem presented with these Miiverse updates, is the actual fact that they are being done on Miiverse. Alongside the item, stage, and game mode updates, another aspect that was awesome about the Dojo was the fact that Sakurai was able to post videos and even music, since of course this was being done through an actual website. Currently, Miiverse does not support direct music or video uploads, and while admins can embed YouTube videos, Sakurai seems to not want to post simple gameplay videos that normally wouldn’t be put up on Nintendo’s official YouTube channel. We have yet to see a single full match of Smash 4 (outside of some off-cam, early development footage from E3). Sakurai has yet to show us the actual game outside of new character reveals that we get once every blue moon.

Yet another prevalent problem with these updates is that Sakurai tends to get stuck on certain characters. For instance, when Rosalina was officially announced, the next 4 updates were about her. Now, a lot of you may not see a problem with that, but if you remember what he did with Brawl newcomers on the Dojo, you would see the problem clearly. Take Wolf’s reveal for an example. Notice how when Sakurai revealed him, he listed the character’s special moves, showed pictures of them, explained moves, and even gave tips on how to play the character; all in one nice, big, detailed update. The current-day Sakurai would’ve taken all of those pictures and explanations and separated them into their own individual update.

And going back to what I originally said about getting stuck on characters, Rosalina has appeared in the latest update for the umpteenth time (seriously, Sakurai, there’s others characters you have there on the roster that you can talk about). Even worse, this picture is of a move of hers that we’ve actually already seen before. 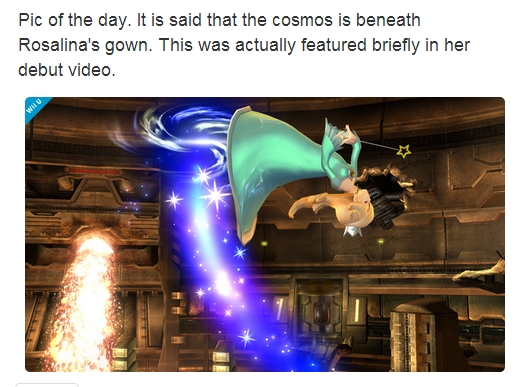 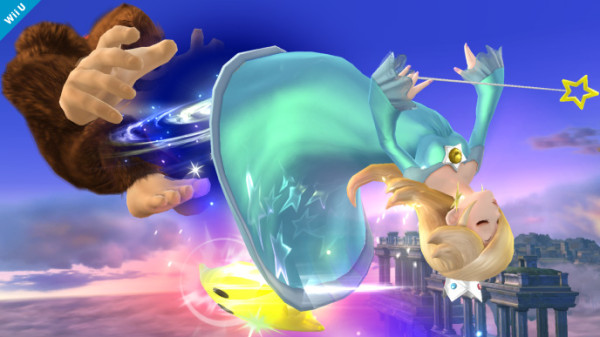 This picture was posted on the offical Smash Bros. website the day Rosalina was revealed. And you can even see the move in her reveal trailer. Why is an update being wasted on a move we’ve seen twice already? C’mon Sakurai.

‘Seems as if we’ve reached a point where Sakurai isn’t even paying attention to the kinds of updates he puts out. Again I ask, why must we see the same move for a third time now? These updates should be well thought-out, not just thrown out there like bread crumbs to ducks. If I were Sakurai, each day during my lunch break (that’s when he does these) I would ask myself, “Hm, what can I show to get the fans excited today?” Showing a ‘cosmos beneath Rosalina’s gown’ (which is hilarious wording by the way, for obvious reasons) isn’t making anyone more anxious to play the game, especially since we’ve seen it before.

And while we’re on the topic of redundancy, there’s another type of update that will reveal nothing new, but still be considered informal by potential defenders: the updates that showcase moves of returning characters. For example, about 3 days ago, after Lucario was announced, Sakurai’s update showed off the difference in size of Lucario’s Aura Sphere when he’s at low percentage and high percentage. [Note: The way Lucario works is that the more he’s damaged, the more damage he will actually output. At low percentages, he’s not very strong at all.] Now, knowing that the Aura system is a returning mechanic for Lucario (which Sakurai confirmed in the reveal post), why would we need to know that his Aura Sphere gets bigger when he’s at higher percentages? That’s exactly how it worked in Brawl! 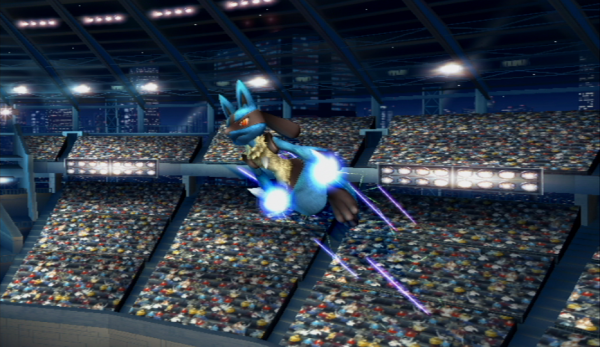 Another example of what I’m talking about.

This move was in Brawl. Why highlight it like it’s new?

If the move hasn’t been altered, then why is it being shown? Sakurai should focus on new moves or old moves with different behaviors – if we don’t see an old move in an update, we’ll automatically assume that the move is still in the game, which is pretty much always the case.

Look, I know I sound like I’m complaining a lot – which I am – but understand that I’m saying these things more out of sheer disappointment than anger or anything else. I am not bitter toward Sakurai or anything of that nature, and once again as an avid Smash fan I appreciate all the hard work that he does. But ‘it is what it is.’ These Miiverse updates exist and are being done for a purpose – a purpose they are currently not fulfilling.

14 thoughts on “Why Sakurai’s Smash 4 Updates Are Inadequate”