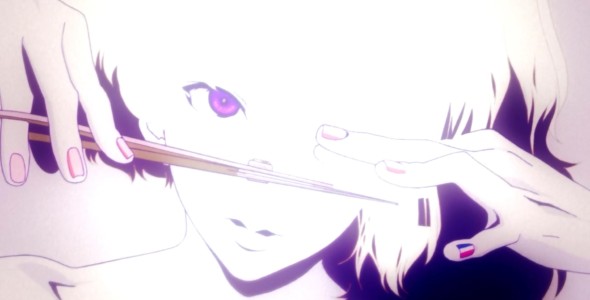 Due to some airing difficulties, the 8th episode of Terror in Resonance was delayed last week and aired this week, but even with the extra week of waiting, I don’t think anyone was ready for this. At all.

Shibazaki is diving further into the investigation, with his job on the line, he’s ready to do whatever it takes to solve it. Finally, we’re getting bits and pieces of Nine and Twelve’s past. What Shibazaki discovered in this episode was that the government was testing children in orphanages and taking the “gifted” ones to be a part of a project called the “Athena Plan.” From that, we understand that Nine, Twelve, and Five were all orphans taken into this project. What they were testing for, is unclear. He finds out that this plan had been aborted seven years prior, and then we’re left hanging after Shibazaki says, “Don’t tell me…” 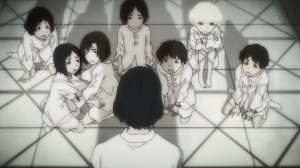 Another thing Shibazaki has discovered, after talking with his daughter, is that the plutonium that was stolen in the first episode is highly radioactive, and only machines could be used to make the bombs that Nine and Twelve are using. They didn’t just put this piece of dialogue in there for the fun of it. It means something, and it means something bad. It’s not looking so good for Nine and Twelve…

I don’t know about you guys, but Five is really getting on my nerves. First, she blows up Sphinx’s hiding place, almost killing Lisa, and now she’s captured Lisa in an attempt to lure Nine and Twelve into her trap. What are Five’s motives, anyway? It’s revealed that she’s basically like a spy, so what does she want with Nine and Twelve? Does she want to steal back the plutonium? Does she want to teach the boys a lesson? So far, she’s just a huge pain in my neck.

This turn of events leaves Twelve in desperation to save Lisa, leaving Nine behind after only offering a word of apology to his friend. I have a bad feeling about this, guys. The tension at the end of this episode is enough to make anyone feel uneasy.

Once again, this was another amazing episode. There was a lot of jumping around from different character perspectives, leaving you hanging and guessing what’s about to happen. We get to see Twelve’s remorse and reluctance to continue on with their plan, meaning that he’s probably thinking about Lisa and her well-being, but I could be wrong (Probably just my shipping feels kicking in, but who knows) The only thing I’m nervous about it whether or not someone is going to die, which is highly possible. (Remember, this anime is completely original. There is no manga to offer spoilers. This is simply me predicting what will happen)

What did you guys think of this episode? What do you think is held in store for Nine, Twelve, and Lisa? Will there be a happy ending? We’ll see, in the next episode!