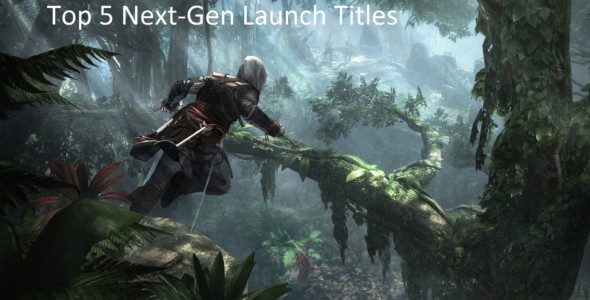 Yes it is all opinion and we can all agree on somethings and disagree on others. Some folks at GaminRealm.Com feel like these Next-Gen launch titles are weak and the line-up isn’t very impressive. I obviously disagree with that. Considering what the Xbox 360 and Play Station 3 launched with. The line-up of games being released at launch are far and beyond stronger than previous Gen and even in by itself these are titles are worth looking into and checking out. So let us go ahead a kick start this list with number one. Yes I’m not saving the best for last.

This is one that is very simple. Even the entire crew at GaminRealm agrees with this one. Watch Dogs features gameplay that is unique, interactive, and immersive. You are basically in control of anything and everything that is connected to a network, which is everything in today’s world. Security cameras, computers, trains, traffic lights. I mean really, I don’t think there is a limit to this game.

Right after Watch Dogs, we all agreed on this as well. This game looks like it’s made for next-gen systems, well it is but what I mean is having a building collapse during live multiplayer gameplay is pretty intense. Not just that, the fact that each game can have up to 64 players online is just ridiculous, pit these players in a fully destructible battlefield and add some crazy vehicles, you have the perfect comp for a perfect FPS War game.

The rest of these titles are purely my own opinion and is not reflected on the opinions of the GaminRealm.Com crew.

Guerilla Games know how to make beautiful games, so it comes to no surprise that they are at the helm of a game that will push the boundaries on what is possible visually. Not just that, but Killzone has always had a rich story and narrative, with an engaging online experience. I have no doubt in my mind that Shadow Fall with follow in the footsteps of its predecessors. This is another titles to keep an eye on folks.

Yes folks it’s on here. Forget the fact that Ubisoft is milking this franchise and rightfully so as it’s been a very successful franchise. Assassin’s Creed 4 does not, and let me repeat that once more, DOES NOT look or play the same as it’s predecessors. Assassin’s Creed 4 features much more hours of gameplay and a new element of exploration and reward. Not just that, I love the fact that it takes place in my home town the Caribbean. That obviously doesn’t count but yes it’s a new Assassin’s Creed they are taking in a partly new direction. Lets also look and compare what Ubisoft is doing with what Rockstar is doing. About to come out is Grand Theft Auto 5, please don’t get me wrong I am uber excited for this game and will be purchasing it as soon as it comes out but folks, Rockstar is also feeding us milk, they are  also feeding on Grand Theft Auto’s success. GTA 5 will be the 10th game in the franchise, so let’s not play duck duck goose and choose only one Developer to bash on milking games. I’ve been told to ask myself one question in relation to Assassin’s Creed 4, “does it play the same?” Sneak to kill, and new in the franchise choose to not be seen and avoid large confrontation. It’s an Assassin’s Creed game, of course it will partly play the same. But also ask that question with any franchise, GTA, steal cars to win the game, that is it. It’s been like that from the beginning. So again let’s not play duck duck goose.