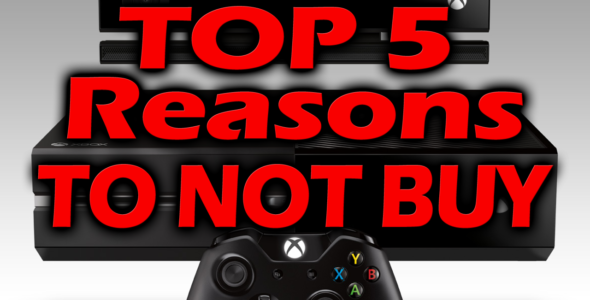 I DO NOT WANT KINECT. Simple, eh? I don’t want it! This is a peripheral that is being forced upon gamers, and what’s more, is that it DOUBLES the cost of the Xbox One package! Sure Microsoft gives you the option of turning it off, but if many of us are just going to turn it off to begin with…why do we need to purchase it in the first place? Make an Xbox One that is the console ONLY, without the spy cam (lets not forget Microsoft’s involvement with the NSA, and how they have access to Skype calls!). Kinect ISN’T a necessity for gaming, it doesn’t do anything but toot horns and ring bells. I don’t need it to sign me in automatically, my Xbox360, PS3, and Steam did that too. There is absolutely NOTHING that Kinect does that we can’t do already

Lets just get this out of the way, I don’t believe the DRM is gone for good. As you can see, recently Microsoft stated that there is a INITIAL REQUIRED CONNECTION & DOWNLOAD for their Forza title releasing on Xbox One. Why must gamers be forced to connect to the internet to DOWNLOAD THE REMAINDER OF A GAME? That’s DRM. It is a fact that unless you have an internet connection, you will not be able to enjoy Forza. I’m just going to wait for Microsoft to announce that some “hacker” has exposed the Xbox One’s security, and they officially bring back their 24 hour check in’s and previous DRM policies.

4. Xbox Live Gold is required for nearly everything, and doesn’t have value

This has always been one of my biggest gripes about the Xbox platform. Nearly everything requires an Xbox Live Gold subscription! People believe that there is value in Xbox Live Gold, but there really isn’t. Just because they put a bunch of features behind a pay gate, doesn’t make it a value. Does it make sense to anyone, that unless I pay Microsoft, I won’t have access my movies on Netflix or Amazon? Without Xbox Live Gold, you WON’T have access to:

And for those with TV service at home, the TV features of your box are also locked away without Gold. So if you have the following TV services, you can’t use them on your Xbox:

…I think you get my point. Microsoft essentially make it to where, if you don’t have Xbox Live Gold, YOU MIGHT AS WELL NOT HAVE AN XBOX ONE! I mean, that is a TON of features behind that pay gate! Now, lets compare that to the features you’d be missing out on with the PS4 (which has just about everything besides the TV features) & if you DON’T have a Playstation Plus subscription:

Yup, that’s it. PSN is getting a ton of new features on the PS4, all of which are FREE. Playstation Plus on the other hand costs $50 a year. But most are willing to pay the subscription fee for Playstation Plus, because in return you get:

Only one word can sum that up…VALUE; Xbox Live Gold just doesn’t have it.

5. Xbox One’s Dashboard was designed “with advertising in mind”

So let me get this straight…I’m forced to buy Kinect (which I don’t want), I have to pay Microsoft $60 a year just to access features I should be able to access anyway, my multiplatform games won’t have exclusive content, some of the games I would buy will have required connections and downloads before they are even playable…AND I’LL STILL HAVE ADS ON MY DASHBOARD? Microsoft is looking to PERSONALIZE ADVERTISING using information collected from your Xbox One and Kinect!? Ok…that’s it. I’m done.

There are more reasons why I wouldn’t purchase an Xbox One, but I feel that these 5 are the most important. Just from these 5 reasons, I just cannot justify purchasing an Xbox One. There is too much one would have to grow accustomed to ignore, and the PS4 completely trumps the Xbox one in value. And you really want to know what makes all this even worse for the Xbox One? IT STILL COSTS $100 MORE THAN THE PS4.