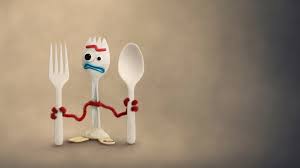 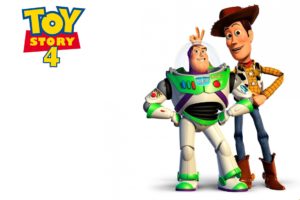 A toy that was once beloved, becomes the back-up only to be used if nothing else is fresh. That’s the vibe I felt with Toy Story 4 and I definitely resonated with being Bonnie, as a child. I would have my oldest toys in the closet or thrown all over the room and would use the next newest toy even if it was a toy I created. I was a big user of Play-Dough and created my wildest inspirations of monsters and blob people and later turned into better three dimensional creations. If you haven’t seen the movie yet, I suggest you stop here because I will drop a few spoilers. 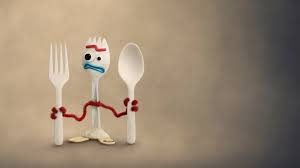 I wouldn’t call a five second or less thrown away pile of arts and crafts materials trash, but if you identify as trash, who am I to tell you that you’re wrong? Forkie, Bonnie’s kindergarten project, comes to life with the help of Woody digging in the trash to salvage a emotional connection for Bonnie to become happy and overcome her loneliness of not being able to bring a toy with her to orientation. After Bonnie’s first day of class was over, she puts Forkie into her backpack with Woody, and Forkie immediately comes to life. Forkie becomes the funniest part in the first act for me, constantly unaware that he is a toy and is not trash, but continues to run to the trash.

Forkie continues to take the second half of the first act as well due to the comedy of his position being totally unfamiliar to him. His ideology is that things made from trash can’t become toys and he essentially needs to own up to what he is. I believe a deep message can be understood from what Pixar wrote for Forkie’s character. This is also a moment where Woody recollects with Forkie about his first experience being someone’s favorite toy, and that owner’s name was Sid…I mean Andy (Trust me I’m totally a fan of this series of movie).

The movie after this point had its highs and lows and they were so good that had me thinking that Pixar could not possibly go anywhere else with this franchise but at the end was a indicator that a Toy Story 5 could be possible. I won’t go further into detail about this movie, because the fans of the series will appreciate the callback characters, and new characters brought into the story. I highly suggest that if you’ve seen the very first Toy Story, all the way to the third one, that you owe it to yourself and family to go out and see this movie.

Have you seen Toy Story 4 yet? Are you excited to see it again, if you have? Let us know in the comments below.

Tune in next time to GaminRealm.com for more animated movie reviews.