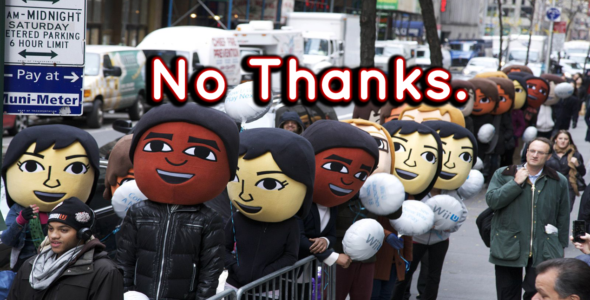 Mii’s are among the most heavily requested “characters” for the SSB4 roster by Nintendo fans – to my dismay. And I somewhat understand it. Who wouldn’t want to use their representative avatar in a brawler that consists of some of the biggest gaming icons in history? But there are legitimate reasons – opinionated and factual – as to why Mii’s simply do not belong in the game. I am here to tell you, Nintendo (or more specifically Sakurai), to ignore these people. They don’t belong. Keep your goddamn Mii’s away from my Super Smash Brothers.

There are many reasons and arguments to be made, but in this piece, I would like to focus on three main points supporting my objective stance.

1. Smash is a crossover game, for actual videogame characters. 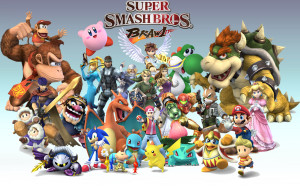 Keep the peasants away from the kings.

I don’t know if you’ve noticed, but Smash Bros. is  a celebration of tried-and-true Nintendo franchises (excluding the 3rd-party guests of course), with fan-favorite characters that represent them. Now I know what some of you are going to say, “But Mii’s are characters! And they’re part of the “Wii” franchise!” But that’s where you’re wrong, they’re not actual characters so-to-speak. They’re avatars. There’s a difference. A character is someone with a personality, a story, someone with attributes, and traits. The word “character” is a combination of qualities or features that distinguishes one person, group, or thing from another. This obviously doesn’t describe Mii’s at all. Avatars are simple representations of you, the gamer. And you the gamer are not a video game character. Your silly-looking Mii is simply not worthy to be battling  it out with the likes of Mario, and Link, and Megaman, and possibly Sonic, nor is it even the same type of entity as said-characters. Your particular Mii may have certain traits, and you may imagine him or her to have a certain personality that reflects your own, but there is no one universal representation of all Mii’s.

Now sure, Wii Fit Trainer undoubtedly busted the floodgate wide-open regarding what kind of characters we could be seeing in Smash Bros., but at least she actually fits the criteria of what a character actually is. Wii Fit Trainer was at least a named individual who had particular traits and served a role within her game. This much can’t be said for Mii’s, as they serve no in-game role outside of the purpose of being digital representations of the gamer, but that’s it. Surely anyone can see the differences between Mii’s and actual video game characters such as Mario, Fox, Pit, Samus, and DK. When I play a game that is supposed to be a crossover of my most beloved video game characters, I don’t want to see your silly custom Mii jumping around in the mix, which leads to my next point.

2. Everyone would use them. Prepare for Mii’s-only online. 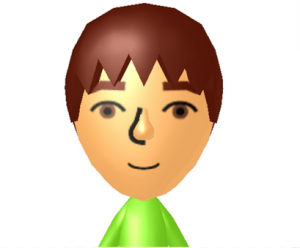 Imagine this, anywhere, everywhere, all the time…….*shutters*

Trust me when I say this, everyone and their mothers would be picking their Mii characters. As I stated in the opening paragraph of this article, what gamer wouldn’t want to see a character that looks like themselves beat the crap out of various gaming legends? Not to mention the highly-customized Mii’s that are made to resemble other video game characters, famous real-world people, and even anime characters. A Kratos Mii fighting Kirby? Billy Mayes  (God rest his soul) fighting Ganondorf? Naruto fighting Olimar? You bet your left nut people would abuse the living hell out of a Mii feature in Smash Bros. 4. This would render the online unplayable (or more accurately, unbearable) for some which would be a crying shame considering the fact that SSB4 will most likely have decent online this time around considering the fact Sakurai received so much backlash from Brawl, not to mention that now they have the Nintendo Network (no way they won’t get it right this time……right?). I know that I will personally be avoiding all random matches online and will stick exclusively to friend matches if Mii’s are integrated into the game. As I said at the end of my last paragraph, I don’t want to see your personal avatar in my game. You may want to see it, but the rest of the world does not. Why would anyone else care to see your Mii? They wouldn’t. Nobody cares about you or your stupid little Mii. You buy and play a crossover game because of the collaborated characters featured in the game – it’s not the place for personal creations.

3. Roster size is limited. You would choose a Mii over Little Mac? 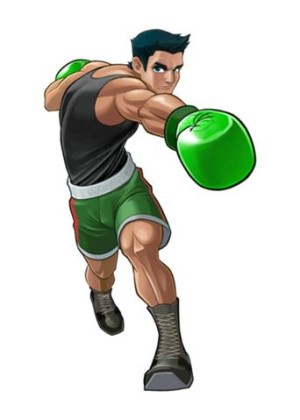 Lord almighty, PLEASE let Lil Mac be in this game!

Sakurai has already confirmed via an interview that he and the team do not have enough time to include all of the previous Smash Bros. characters. Always keep in mind, people, that fighters cannot have a limitless roster size, and developers only have a set amount of development time and resources. So with Sakurai stating that everybody from the previous games will not make it into SSB4, you would really want one of the character slots to be Mii’s? Think about that. You would rather have Mii’s over Chrom from Fire Emblem Awakening? Shulk from Xenoblade? Krystal from Starfox? Little Mac? Or third party characters such as Bayonetta, Wonder Red (W101), and Lloyd Irving from Tales of Symphonia? Think about it people, if Mii’s do end up being playable in the game, imagine who they prevented from being included into the roster. There’s no telling what kinds of epic awesomeness (yes, epic awesomeness) that was being considered for the game but was scrapped so that they could add those meager, insignificant Mii’s. Now if your answer to this point is yes, you would want a Mii over any of these other characters, then shoot, I don’t know what to tell you. But I’m sure literally nobody here in their right mind is stating such delusional heresy. There will always be hundreds of more-worthy characters that can be put into the game instead of Mii’s, point, blank, period.

As I stated before, there are a lot more reasons as to why I want Mii’s to stay as far away as possible from Smash Bros., but those other reasons (being: I think they look annoying, and they make extremely annoying sounds – imagine all the noise they’d make in a single match!) are more along the lines of opinions and what does and doesn’t annoy certain individuals. I feel that the three points I talked about here are rock-solid and 100% legitimate though, so these will more than just do.

Now hopefully people can start thinking more logically about who they want in Super Smash Bros. Wii U and 3DS. There’s other characters as well that I see being requested that just wouldn’t make any sense (I’m looking at you, Ridley – he’s too big! And anime characters?…..get out of here with that!) but that would cause for one painfully long article so I’ll have to leave it at just the Mii’s.

Let me know what you guys think down below. For any of you who disagree, I would love to see your arguments as to why Mii’s would be acceptable for Smash Bros.

37 thoughts on “Why Mii’s Don’t Belong In Super Smash Bros.”