Yes, you read the title correctly: The Xbox One will win next gen.

Before I get into my explanation, let me just say firstly that I am someone who isn’t particularly fond of Microsoft. I generally like the actual Xbox systems (though not nearly as much as Nintendo’s and Playstation), but as far as the company behind the platforms? Not so much. So this article isn’t coming from some Xbox fanboy or journalist that has been paid-off by Microsoft to spread Xbox One propaganda. My objective prediction is coming purely from logic and educated reasoning.

Despite all of the doom-and-gloom surrounding Microsoft and their next-generation system, I feel that gamers are not looking at the full picture. Many are stating that the console is going to be dead-on-arrival, or the PS4 is going to crush it, and some even believe it’s going to be beat out by Nintendo’s Wii U once the system gets it’s ball rolling with some first-party games.

Now I understand where these naysayers are coming from. I used to almost feel the exact same way. But then I stepped back, assessed Microsoft’s plan and what the Xbox One had to offer, and came to the realization that the system is the most likely candidate for winner of the next generation.

Why? For the same exact reasons many gamers feel it’s going to fail – the non-gaming related features. “It’s a freakin’ cable box!” was the mud-sling of choice thrown toward the system. But it’s that exact reason (among others) that the Xbox One is likely to capture the biggest audience. 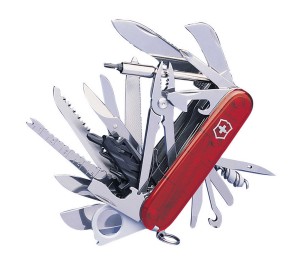 The Xbox One in a nutshell, and just what the consumers are looking for.

Think about it. We, the hardcore gamer, may not care or think much about the X1’s non-gaming features, but the key concept we all have to understand is that we are the minority. Vocal, yes, but still small. The more casual consumers undoubtedly out-number us. So while we primarily want to purchase a console for the sake of games, there is a bigger demographic out there that are more interested in multitasking machines. In reality, that’s how the majority of general consumers are nowadays. Whatever they’re buying – it doesn’t matter if it’s a toaster, phone, refrigerator, or TV – they’re looking for that one product that can do the most. The most versatile machine. And this rule applies for the gaming systems as well.

We may not think much about it’s TV capabilities, or it’s fantasy football, or it’s screen-splitting features, but in the eyes of typical every day consumers, these capabilities are nothing short of amazing. Not to mention the brand new Kinect 2.0 that’s bringing a lot more to the table than it’s predecessor, such as it’s advanced voice recognition and more accurate body-reading. Remember, these people are a lot easier to please and impress than we are. In their eyes these features are straight out of futuristic sci-fi. We may see and understand the fact that you don’t need a gaming machine to watch TV or browse the internet, but these people won’t. The gimmicks will utterly ensnare their minds.

Also keep in-mind that Microsoft pretty much owns the North American market, which just so happens to be the biggest market in gaming. Now yes the PS3 may have finally surpassed the 360 in sales, but at the same time, the Playstation 3 has had an advantage that all the Playstation home consoles have had, and that’s it’s disc format. The PS1 wouldn’t have sold nearly as much if it couldn’t have been used to play CD’s. Tons of casual consumers bought a PS2 so that they could watch DVD’s on it. And in 2006, the PS3 was virtually the cheapest Blu-Ray player on the market, so it was a steal to purchase a multimedia game machine that could play Blu-Rays rather than a stand-alone Blu-Ray device. No one can deny that the Playstation brand has been greatly aided by it’s non-gaming related capabilities.  But with this gen, we’re not hoping into a new media format. We’re staying with Blu-ray, and now the Xbox One appears to be the bigger multimedia device. The PS4 may have the stronger specs, but the general consumer doesn’t necessarily give a rats-ass about what’s under the hood of a video game machine. Microsoft’s ability to market many of the Xbox One’s gimmicks holds more power and weight than the PS4’s 8 gigs of RAM and shaders ever could.

Again readers, this is coming from someone who prefers the Playstation brand over the Xbox, but we must learn to set sentiments aside and look at the potential outcome of the next console war from a marketing standpoint. Microsoft has a lot more factors they could utilize to awe the consumers with than Sony does. I wholeheartedly agree with some of you that the PS4 and even the Wii U will be the better machines for us gamers, don’t get me wrong. But again, remember, all of us here on the internet who come to these gaming sites scouring for news are only the vocal minority.  We are not the entirety of the market, just a portion of it.

Microsoft may have lost a lot of sales that would’ve came from hardcore gamers (despite reversing their DRM policies), but  those sales will be effortlessly replaced by consumers who are easily wooed and then some. At the end of the day the winner of a generation comes down to which system can secure the most casuals. The PS2 1 did, the PS2 did, and the Wii did it. Now, it’s looking like it’s finally Microsoft’s turn to wear the crown and have their moment of glory. A lot of you may not want the system to win due to what Microsoft tried to pull, but it is what it is people. The possibility of the Xbox One bringing it home for Microsoft is highly probable.

Let me know what you think down below.

37 thoughts on “Why the Xbox One Will Win Next Gen”