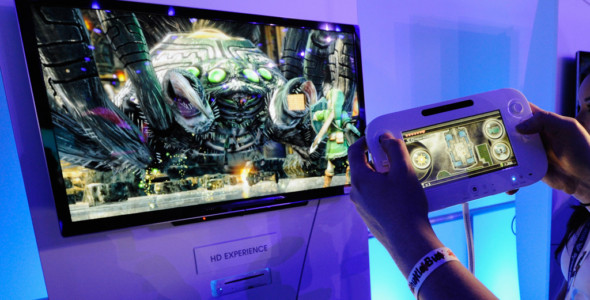 Despite the fact that the Wii U has been out for a little over a year now, the system’s full capabilities are still shrouded in mystery. Ever since the GameCube days Nintendo has been rather tight-lipped about their systems’ specifications. But as time goes on, more and more light gets shed on the Wii U’s hardware situation.

The folks over at CinemaBlend have been digging up some info, and had this to say regarding the Wii U’s total system memory bandwidth:

It’s been speculated that taking the information above into consideration, the Wii U’s total bandwidth of gigabytes per second, including the possible 1024 bits per macro and GPU – which, according to TechPowerUp clocks in at 550mhz – would come out to around 563.2GB per second. Keep in mind that the Xbox One runs about 170GB per second of bandwidth between the DDR3 and eSRAM, as outlined by Xbit Labs.

This could explain the Wii U’s ease of hitting 1080p at 60fps with nary many complaints from those who actually enjoy working with Nintendo’s hardware.

Of course this in no way means that the Wii U is stronger than the Xbox One (for those of you who aren’t tech savvy) and remember that memory bandwidth isn’t everything. But, this does explain why the Wii U has a much easier time achieving  1080p/60 fps games than the Xbox One does. Smash 4, Bayonetta 2, and Mario Kart 8 are all reportedly 1080p and 60 frames per second.

There’s tons more interesting tidbits in the article, such as the system’s DX11 equivalent capabilities as well as it’s ability to achieve Shader Model 5.0 capabilities. A source that spoke with CinamaBlend, who wished to remain anonymous, stated that of course the Wii U could not actually use Direct X since that is a Microsoft owned API, as well as Shader Model 5.0, but it can achieve some of the same affects that those API’s use through work-around.

“The answer is no. [The Wii U can’t] use [shader model 5.0] because it’s Microsoft exclusive. “You can do some stuff… tessellation [is possible]. You can do that on the Wii U.”

All of this simply means that the Wii U is much more capable than previously thought. The article also touches on how the Wii U is a GPU focused machine while the 360 and PS3 were CPU focused. Add this in with the report that many of the Wii U’s multiplats didn’t even use all of the CPU cores, and it serves as further explanation as to why some of the multi-platform ports had performance issues when it came to frame rate.