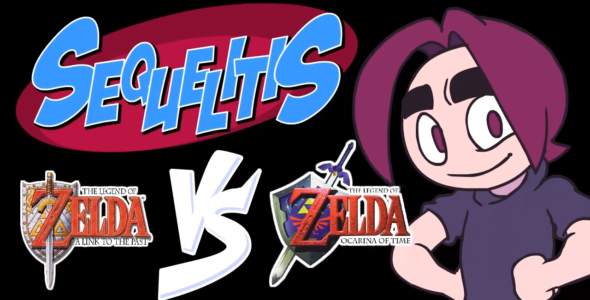 Most of us are fans of the first 3D Zelda title, Ocarina of Time, however, the Youtuber known as Egoraptor has some constructive criticism for the popular game and compares it the Link to the Past in his newest installment of “Sequelitis”.

For those who do not know, Arin “Egoraptor” Hanson creates a number of gaming related content on Youtube. In his show “Sequelitis”, Hanson takes a look at the progression between video game sequels, and how the design choices affect the player’s experience.

Typically, a person talking about Ocarina of Time on the internet isn’t very interesting, since it’s been done a million times over. The game is usually praised by fans. This time however, Egoraptor goes very in depth with the N64 game’s design, and mentions quite a lot of negative things about the title that many (including me), probably have never picked up on before. The points he brings up in the video are very well thought out, and definitely changed my perception on a few things (as much as I still love Ocarina). I don’t want to ruin it, but if you are fascinated by the intricacies of game design choices, I definitely recommend checking out the video to get an objective opinion on a beloved game (with some funny moments thrown in). It is a thirty minute long video, but it’s worth it. Also be warned that the content is explicit.

You can watch it here.

If you saw the video, what did you think of his points?