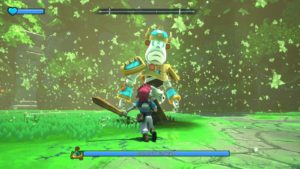 A Knight’s Quest for the Nintendo Switch has been a very creative turn on the Action-Adventure scene for an avid fan of the genre, like myself. I didn’t know what to expect when I started the game but I felt an initial vibe of The Legend of Zelda: Breath of The Wild, as well as the Ni No Kuni series. I enjoy the amount of detail in the Foley of the environment as well as monsters having life as they roam about the over world. I will add that this game would be great on a long plane ride, as it is very easy to pick up and go. There are some key details in what made the game enjoyable but there was some bugs that I noticed that I will mention as well. The music is very fluid and the changes between areas were sequenced pretty well.

The plot and goal of the game was your bread-and-butter action adventure beginning, find the spiritual (insert idea here) objects and you go through different areas on the map to find items to aid you on your questing. What made this game stand out was the hilarious comments the main character and in game messages had. Each time an item was acquired, such as potion, it would say “You found a potion, tubular!” The monsters I wish would be more aggressive in the approach of your character. I was able to walk right on up to enemies and until I attacked them, no fight sequence would be initiated. I didn’t need to have music change for a monster battle in the over world, but that would be a nice touch if it was there. I also took no damage from enemies by being right up on their hit box and closer, I feel that taking damage from being too close would delineate the difference from an NPC and an enemy. Also I feel that non-destroyable objects should not damage the character, for example a fire-pit, cacti or etc, if a monster can’t do the same effect. I also believe that I should not be able to hit an NPC, even if it’s by accident.

The animation of dropping from too high of an area always results in your character getting re-spawned to the location you jumped or fell from. I was on the way to the second main level of the game where you have to acquire the Grind Boots, and I wanted to drop from the moving planks faster and I believe that certain heights should allow you to fall and take damage and keep moving. Unless it’s a bottomless pit or an area below that is not possibly capable of returning from should be the only means of a necessary re-spawn. I felt like that slows the game down considerably and for some could cause a bit of frustration compared to other games in this genre allowing that feature.

The bugs I noticed were for the most part few and far in between, however some caused me to re-spawn after being unable to move for a period of frames. When trying to break a barrel in the underground water area, I tried to break open a barrel and when I chose the Y button as an action, my character “T-posed” and froze for a few seconds. I am not sure if that was the Switch was in need of an update or the Game needed one, but it happened enough times at once to mention. Also where I managed to stop in progress was I believe to be a bug in and of itself, due to me speaking to the first Rock guard I seen and a message was received “You helped us out big time, you are now allowed to enter the Shrine of the Flame Guardian” but when I walked to the next NPC trying to advance, I keep getting a message saying “This Area Off Limits”, I don’t understand how to progress from here if it’s literally giving me the puzzle complete sound for talking with the guard prior to the entrance giving me access.

All in All the game is a great game to play if you’re on a long flight somewhere or on a road trip, or you just need an action-adventure fix, this game will check a lot of boxes for you.