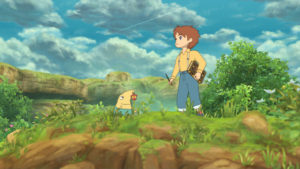 This is a great time for the capitalization of one of Studio Ghibli’s most successful intellectual properties, Ni No Kuni. With Ni No Kuni Wrath of The White Witch getting a remaster scheduled to release soon, According to Gematsu, there’s been three trailers released by Warner Brothers for a Ni No Kuni animated movie featuring characters Yoki (voiced by Mamoru Miyano), Gavalas (voiced by Kenjiro Tsuda), and Danpa (voiced by Yuuki Kaji). A summary of the story of the movie from the official website reads as follows:

The calm, cool, and collected, wheelchair-bound Yuu, the popular Haru from the basketball team, and Haru’s girlfriend Kotona are high school students who have been friends since childhood. One day, Yuu and Haru are transported to a magical world parallel to the real world called “Ni no Kuni” after trying to save Kotona, who was suddenly attacked by someone. Ni no Kuni is a world where “another version of oneself” exists, connected to their parallel self. Yuu gradually becomes attracted to the princess of Ni no Kuni, Asya, who is the spitting image of Kotona. However, he is faced with a cruel rule: “In order to save Kotona’s life, Asya’s life must be taken.”

Haru wants to save Kotona. Yuu wants to protect Asya. When it comes to the “ultimate decision,” where the lives of those dear to them hang in the balance, what decision will Yuu and Haru make? Stop by GaminRealm.com for more coverage of the Ni No Kuni animated movie.