As season 2 turns into an addictive season for Arrow, it turns out that comic book fans have been asking – why doesn’t Oliver Queen wear a mask? I myself don’t really care for Green Arrow’s “mask” I never understood how that is considered as mask all it does is cover up your eyes. You walk into public with that stuff on your face and people will instantly reconigze you. Anyway, further into the season, Oliver will finally wear the mask of his comic book counterpart: 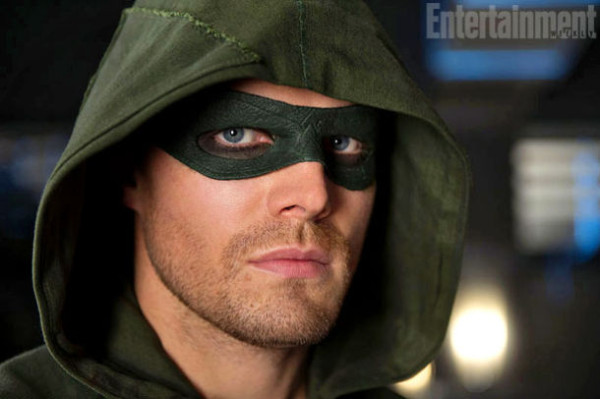 The show’s executive producer, Andrew Kreisberg tells EW, ”Conceptually, it was something we wanted to do because Oliver himself is evolving as the Arrow — from vigilante to hero, sort of from Arrow to Green Arrow — and we wanted to see that progression in his costume as well. As Oliver is embracing being a hero, being a hero means stepping out of the dark and being more of a symbol, so he has to take steps to conceal his identity more.” He also make a point to say that the mask will play a role in the story so it’s not just there to be there. “He doesn’t just put on a mask. It’s actually a big plot point in an episode, and there really is a story behind, not only the need for the mask but also who provides him with it. It’s going to be a little bit of a surprise, and once they see how the mask comes into creation, I think people will be really excited about it.”