With Berserk Musou around the corner for release on all major consoles and platforms, the buzz for this title seems to be growing daily. If your a follower of the original manga and animated film adaptation, then your going to be in for a treat. Berserk is going to feature the main playable character as we know him, Guts and his allies Casca and Judeau; as well as members from the opposing group known as Band of the Hawk. Recently rumors are flying with additional characters supposedly becoming available at some point, one character in particular which is causing most of the rave is non other than Nintendo’s Link from Zelda as pictured in the screenshot below. 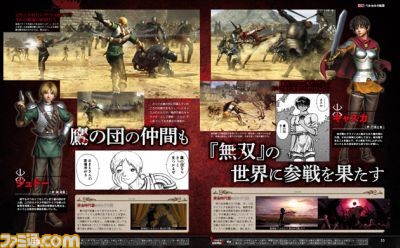 Either way this game which is basically going to heavily mirror the Dynasty Warriors gameplay style will be an undoubted hit among gamers who love a good hack and slash. The rest of the year seems to be taking a slight detour in the playable games we hope to expect, with big open worlds and landscapes. Games such as Sword Art online, Monster Hunter: Generation X, God Eater 2 and Berserk Musou are going to make a big splash and are definitely needed to break up the monotony of first person shooters. Take a look below at the trailer and weigh in on what you find most appealing.

2 thoughts on “Berserk Is Coming”