Capcom…its time. Its time that you finally stop blaming gamers, giving excuses, and give the fans what they want. With the Mighty No. 9 Kickstarter over, dedicated gamers (who believe in the spirit of the Blue Bomber) have donated over $4,000,000 to Inafune to create Mighty No. 9. Each and every single goal was reached:

Clearly, there is a immense desire for more Megaman from gamers. But the company that owns Megaman, Capcom, is so intent on not giving gamers what they want. I would like to think that a company would understand that if they give gamers what they want, gamers will return that service with cash; but for some reason Capcom doesn’t understand this, and even goes out of their way to spite Megaman fans.

Secondly, when Capcom was asked why there was no Megaman in Ultimate Marvel Vs Capcom 3, the producer (Ryota Niitsuma) of the game stated that “Out of all of the requests we got for Capcom characters, he just didn’t enter the top part of the ranking. Unfortunately, he didn’t make the cut.” We know this to be untrue! Because on Capcom’s own poll, Megaman X was number one:

And lastly, when Megaman was rumored to be in Street Fighter X Tekken, gamers got really excited! Would it be Classic Megaman? Megaman X? Megaman EXE? Well, no one expected this instead: 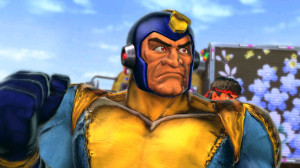 Seriously, Capcom, I believe its time to listen to the gamers. You’re in a financial crisis because of your business practices; and gamers don’t trust you anymore. Just bear in mind, that where you fail, others will succeed. Where Megaman dies, his spirit shall rise!

Mighty No. 9 will be released on every platform: Xbox360, PS3, 3DS, PS Vita, Wii, WiiU, PC, PS4, and Xbox One. A big thanks to all the gamers that helped contribute to one of the most anticipated games I’ve seen in a long time, and for helping prove Capcom wrong!

17 thoughts on “Capcom, It’s Time To Admit You Made A Huge Mistake”