Yoshinori Ono is back to his old trolling ways on Twitter. Today, Ono posted a picture of his signature Blanka figure in front of the Osaka Street Fighter R&D team who appear to be playing a very old game. It’s running on the Super Famicom aka the Japanese SNES.

According to those on twitter the game in the picture is called “Battle Blaze” released in 1992 by publisher Sammy. Battle Blaze is a medieval themed fighting game in where players use various weapons relative to the time period to do battle. It’s kind of like the Deadliest Warrior except good. This doesn’t mean that Capcom is planning on rebooting Battle Blaze for next-gen because as Ono points out in his tweet, they are using this game as a guide for their next idea. It could be a new IP they are working on, or they are taking one of their older fighting franchises that aren’t Street Fighter and putting a new spin on it. Who Knows? Will it be for PS4/XBO? Will it be multiplatform? Will it go the way of Tatsunoko vs. Capcom and become Nintendo exclusive? Will Capcom reveal this at E3 2014 or EVO 2014? We’ll keep you posted when more info breaks.

All I can say is as a huge fighting game fanatic; I can’t wait to see what this is. 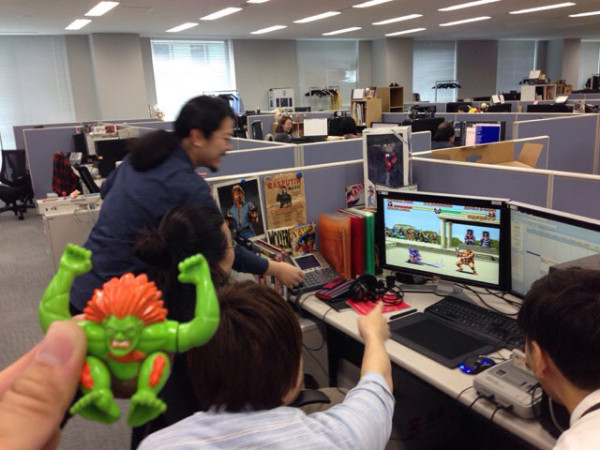 I backed to CAPCOM Osaka Studio at SF r&d team. Wow! Is this under study for new title!? Ummm interest in scene… ;P http://t.co/UUNoDIZXLB