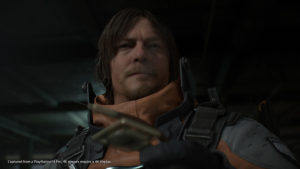 Death Stranding was initially set to be a PlayStation exclusive for November 8, 2019, but now it has been reported that Death Stranding will be released to PC in Summer of 2020. People that are die-hard Sony supporters have cancelled their pre orders of the Hideo Kojima directed title. The madness behind harming a company, organization or brand that you love, only because it’s no longer exclusive to a favorite brand of choice is nothing less than ridiculous. I feel that since there’s still much to learn about the plot and direction that this game will unfold should excite a player to great lengths.

Gone are the days when a game was announced on a television and the outlets for information were limited. The only amount of information you received was a possible release date, details about what the game will be about and screenshots of what it will look like. The development team has went through a lot to bring this game project to the light of day and once it arrives, November 8, 2019, the reactions will be finalized due to the project being able to be played.

Have you returned your pre-order of the game or are you ignoring the anger and willing to play Death Stranding once it arrives? Let the comments arrive.

Stay Tuned for more updates regarding Death Stranding on GaminRealm.com