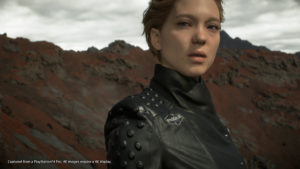 We are slowly but surely learning more of what’s to come from the Hideo Kojima title known as Death Stranding. Kojima has been on record stating things like 50 percent of the way through the game is where it’ll get really fun and that really became up to the interpretation of the player’s thought process, and now we’ve got a size of the hard drive space needed to play this game will be massive. Games are becoming huge juggernauts, taking a lot of space off of your hard drive, such as Red Dead Redemption that uses upwards of 100 GB! DLC and other file requirements for other AAA titles have gotten that close, but Death Stranding will estimate around 55 GB, according to Pushsquare. All the file size news to me means that that’s one more game to go towards an extended hard drive space instead of on my console.

Are you still excited for Death Stranding, or has the hype train missed your stop? Let us know your thoughts.

Stay Tuned to GaminRealm.com for more coverage of Death Stranding.