With Besthesda’s conference came a host of information regarding games which we already had an idea that would be covered and addressed. But the information regarding Dishonored 2 was so elaborate and detailed, that we were all shocked at how they completely transformed the game become, from its first installment. Now I’m not going to reiterate what the story is about and the plot, because if you don’t know it by now, then your probably not even going to click on the title of the article, or bother to play the game. What i will say, is this; Dishonored 2 is shaping up to be a nicely well uniformed game.

What Will Be Different?

From the graphics, to the gameplay, each have been astoundingly overhauled. Even the combat techniques and abilities used by Corvo and Emily(main protagonist) have more fluidity in how they are executed and used during gameplay. Bethesda has learned so much since the first installment of the game back in 2012 until now, so it will be nice to see how they chose to tackle the issues we had from the first title and how they plan to implement the solutions. 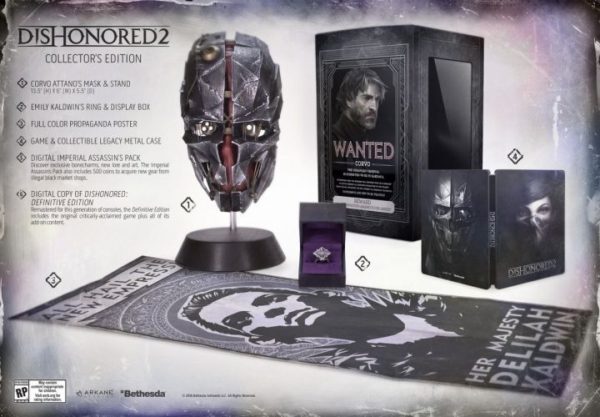 Are There Any Incentives?

Other noteworthy information given, will be that Bethesda plans on creating a collector’s edition for the new game title setting to launch November 11th, 2016. Which will include a sculpture of Corvo’s mask, Emily’s ring and various artwork to accompany the game. Also the definitive edition of the first Dishonored title will be included, so new comers alike will be able to start from the beginning and understand the journey leading up to Dishonored 2.