EA Announces it’s brand new service, “EA Access”. EA says it will be the best way to play EA’s games. Here’s what EA had to say about their new service:

We have partnered with Microsoft to deliver EA Access, an all-new monthly (or annual) membership for gamers exclusively on Xbox One that starts at just $4.99 a month. The service is being rolled out in beta to a limited number of players today, but it will launch for everyone on Xbox One soon. At EA, we are always looking for new ways to make it easier for gamers to play more EA games across all platforms, and we are excited about what EA Access will offer to players on Xbox One.

EA Access membership unlocks The Vault, a collection of EA’s biggest games on Xbox One ready for you to download and play. During the beta, gamers will have unlimited access to four great EA games: FIFA 14, Madden NFL 25, Peggle 2 and Battlefield 4™, with more titles being added soon. That’s over $100 worth of games for $4.99 a month. You can play these EA favorites as much as you want with the click of a button. 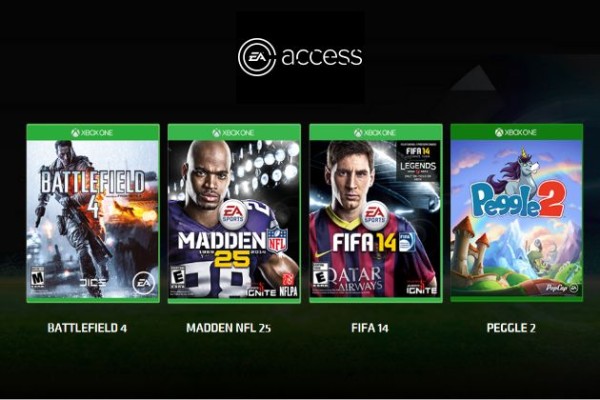 EA promises an “awesome value” allowing EA Access members to save 10% on purchases of EA digital content for Xbox One offered through the Xbox Games Store. Whether its a full digital-download title such as the upcoming Dragon Age: Inquisition or even FIFA Ultimate Team points, it’s all 10% off for members.

Another good perk of having a membership in EA Access is that it will allow you to play trials of new EA games up to five days before release. Some of these games include FIFA 15, NHL 15, Madden NFL 15, NBA LIVE 15, and Dragon Age: Inquisition, but there are more to come. The best part about this is if you decide to buy the game, all of your progress will carry over so you finish what you started.

EA Access will be priced at $4.99 per month, or you can purchase an annual membership for $29.99 per year on Xbox LIVE.