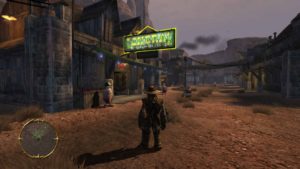 Enter into the Wild Wild West, in Oddworld: Stranger’s Wrath HD. This game is currently available for purchase for the Nintendo Switch, and is the HD remaster that introduced me to the series. I will say from first time playing this game, the environment and atmosphere of the concept caught my attention in an obvious western movie vibes from back in the TV Land days and earlier. You play as a bounty hunter by the name of Stranger and you’re tasked with catching a wanted outlaw that was on the run and the game begins with an oversight of all of your tools used to catch your prey. I captured the bounty using a vacuum attachment on my equipment and that element reminded me of Ghostbusters but we aren’t catching ghosts.

You have several different critters that you can use as ammo to either tie up, incapacitate, make them wander off, or simply knock themselves off a cliff because the enemy will eat at them until they fall into the water. The amount of critters’ slots are available go up to eight and I found and unlocked four of them. The main ones I found my self using were the Zappflies, which will cause light damage and will also charge up power spots to open up certain doors to new areas or cause something to fall on an enemy if it’s attached to one of these particular Zappfly elements. The next piece of ammo that I noticed myself using most of was Bolamites, which mainly resembled a creepy small spider that I wouldn’t want on my crossbow, to be quite honest, however it’s one of the most useful to incapacitate an enemy. While playing on easy mode, just to get a gradual feel of the combat and how things operated, I noticed I could use ZR or ZL on my Switch Pro controller and close combat knock out pretty much any enemy, the problem lies in doing that if you’re ganged up on by more than 3 enemies.

I ended up dying shortly after I witnessed the cronies of the enemy known as “Filthy Hands Floyd” seal off the path into town and the player has to navigate through the rubble to track down the bounty dead or alive. This game has varying difficulties as well as the ability to change up many different elements to the game for a different game experience. In the settings tab before you start the game, you can select from multiple different language options. Some of the language options I couldn’t identify their origin so I think that means this will cater to a larger variety of audiences. The subtitles can be switched from on to off, which leads me to talk about the voice acting of certain scenes did sound like perhaps the actors were reading too much from the script, instead of bringing more life to the character. It wasn’t too big to notice but if you’re one that is captivated by a great storyline, maybe that’ll hang you up a bit but the delivery wasn’t all that bad.

The UI, or user interface can be changed from the 2015 version or the 2019 version and that will tailor to old fans of the franchise or perhaps you want to see how everything had changed in the HD remake. The difficulty settings are from Easy, Normal and Hard and I’d suggest that if you’re new to the Oddworld franchise that you start off at Easy then work your way up, because the enemy’s AI is very easy to practice and refine your aim in the first person view with your crossbow or just to get used to switching the ammo you have available easier. If you also have time before you dive into the game, check out the “Extras” section on the main screen, the development team brought some goodies showing concept art, drawing and finished products of many different areas that you have unlocked during your playthrough.

All in all, this game was a nice change of pace in the terms of showing me another way you can demonstrate a western feel while maintaining originality.