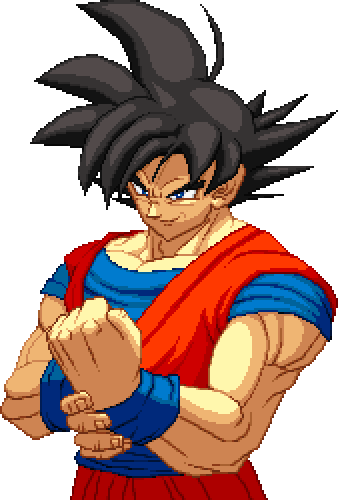 Well, hey there Goku. A real kick-ass combo-heavy fighting game made by DBZ fans for DBZ fans like myself. Everyone knows that DBZ fighting games are in overload mode as each game Bandai Namco shoots out is mediocre with long drawn out controls and only focusing on the visuals over gameplay. It’s unanimous among the fanbase that Budokai Tenkaichi 3 was the last great DBZ fighting game and that came out in 2007.

The game is called Hyper Dragon Ball Z and to be honest, yes, it’s the infamous open-source computer program called MUGEN in which creators and modders can copy, paste and drag exported, fan-made and modified fighting game sprites from professionally made 2D fighting games from the past. My brother and I made a MUGEN in high school and it was the most popular MUGEN out of everyone’s in the entire school. But this version outdoes mine by 1000 miles. From the description from their YouTube video:

Usually packed with tons of characters, those games have always left us with a bad taste in our mouths.

This demo is based on games in the vein of Capcom’s Street Fighter and Darkstalkers, adapted and fine-tuned to represent Dragonball’s highly cinematic action in a way that actual combat means more than repeating the same combination of buttons over and over again.

This is how we envision a perfect Dragonball game. Gone is the sensation of every character being interchangeable and having the same style of fighting.

Instead, we have characters with beautiful animations, cinematic moves, skillful combos, interesting move sets, unique traits and the kind of fanservice that’d make any Dragonball fan smirk. We drew from all sources and we committed to our vision, which we share with you.

Support these guys. Hopefully, when the full version comes out we can get a review out.