This series as a whole has brought something totally new to the world of anime. Terror in Resonance has no resource material, meaning that it is completely original. No manga to reference from. It’s a unqiue, smart, beautiful series that’ll leave you guessing and on the edge of your seat.

The story follows two boys, Nine and Twelve respectively, who are out to change the world. And how else to do that? With bombs, obviously. Their alias online is “Sphinx”, where they upload videos to YouTube, depicting clues and riddles to unlock the location of their bomb. Little is known about them, or their past. But what we do know is that they were both raised in a facility with other children, and under mysterious circumstances, the building burns down, and kills all the children within, with only the two of them surviving–plus one. Another girl by the name of Five, who is out to sabotage Nine and Twelve’s master plan. What I get from her, she’s not a good guy. 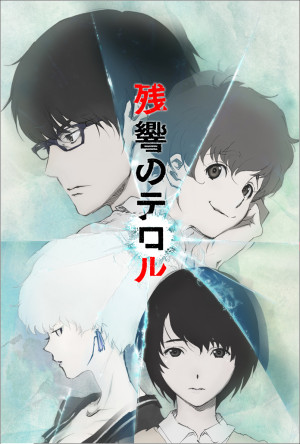 Another character, Lisa, is just a normal high school student who gets dragged along for the ride after unknowingly assisting in their first terrorist attack. Except she’s living in an unstable household, her father is missing, and her mother is a bit of a basket case. Always being checked up on by her mother, who is the only person who ever calls or texts her, Lisa decides to let herself be whisked away by Twelve and run away from home to join them in their efforts to change the world, whether it be from destroying it or other means.

We’ve got a lot about this series that is interesting. First, let’s take a second to talk about the many hints of foreshadowing that pop in randomly in certain episodes. It’s exciting, but when you stop and think on it, they’re all very dark and depict what might happen in future episodes. I don’t know about you guys, but I’m terribly attached to these characters and I would be devastated if something terrible happened to them.

What I love about this series is that it’s so different from anything else I’ve watched. It’s very smart, and you can’t look away for a second, or else you’ll miss something important. I sit down and watch a full episode, and I feel like I’m only watching five minutes, because it’s just so good. The whole episode flies by, while I get to sit and wallow in sadness for a whole week until the next episode comes out.

There are likeable characters, a brilliant OST, the animation is gorgeous and let’s not get me started on that opening.

The 7th episode left us with Five, holding Lisa’s student ID. She’s got Lisa’s name, her address, and most importantly–her face. Five is coming out swinging, and she’s going to get to Nine and Twelve the only way she can: Through Lisa. From what we’ve seen, Nine and Twelve really don’t want to kill people, but Five has little to no problem murdering thousands of people.

What will happen to our two anti-heroes? How will Lisa be involved in this whole mess? This series is getting more intense by the episode, guys, and if you’re not watching, you’re doing it all wrong.