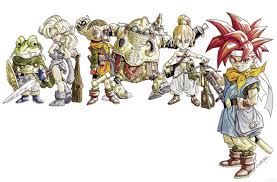 Video Game soundtracks were the key to a happy life of sound for me as a child. Each game I played had an arrangement of music that would change depending on location, a monster approaching, or an unfortunate death that befell on you. I loved sitting back and listening to the orchestra that created each tune depending on what area you were in and proceeded to still listen to various amounts of original soundtracks to this day for many reasons. Whether it’s to help me exercise in the gym, or to relax my nerves and go to sleep, I have five songs in particular that were huge in shaping my love for a great video game soundtrack. This list is in no particular order and I will make a list in the future detailing my favorite game soundtracks as a whole.

After you’re labeled as fugitives by Esther’s army and mostly every Garden wants to apprehend you, you arrive to a very serene place called Fisherman’s Horizon. This track is by far one of the best on the album for Final Fantasy VIII in my opinion, and has always held a special place in my heart. I use this particular track for studying purposes or just relaxing on a slow and mellow day. This tune is responsible for my in game play time moving five minutes. I would just sit and listen to it for hours.

Let me start this next track in the article by mentioning that White Knight Chronicles needs to make a return to PlayStation 4 or maybe even PlayStation 5 or Steam. White Knight Chronicles II was the last game made in the series and a few years back lost online support by Level-5. This particular track, Traveler’s, is my favorite opening in any video game, the various instruments used together was very original and well timed to be fast paced and I could honestly see myself getting an extra motivation in the gym from this song. I loved the accompaniment the most and very few songs sound great in both Japanese and English translations, so the musician choice was also spot on. Level 5, please bring this awesome RPG back.

After encountering a strange boy in the town square and seeing the Circus, you get chased by a psychotic clown with a clown robot into the Underground Water Channel. Which also happens to be your first dungeon, Underground Water Channel has some of the best beginning tracks to give you a feel of beginning but upbeat tempo as well. The soundtracks in this game as a whole are paced very well and there is no dull track in this game in my opinion.

Taking this soundtrack back to the late 90’s and early 2000s, Pokemon Gold and Silver’s Violet City, had me inventing lyrics that could fit with the melody. I sat around in this city for several minutes to get a vibe of what the accompaniment was going to bring. No matter what I feel the high point of the song would peak once I reached Bellsprout Tower. At the time, I didn’t expect much from a Game Boy Color’s sound design but I was blown away by this track. It also holds up very well in time if you decide to play it on the Nintendo 3DS.

This particular song is another throwback to the Nintendo 64 era. I loved the humor and creativity that was brought to the game’s soundtrack. It resembled a true anime comedy that even had cheesy sitcom laughter and familiar sound effects that you’d hear from most Shonen Jump animes. I loved that intro to your very own Gundam….I mean robot. (yeah it resembled a robot version of Goemon in my opinion)

Did one of your favorite tracks from a game make the list? If I missed yours, let us know what song it was in the comments below.

Tune in to GaminRealm.com for more Top 5 favorites in gaming.