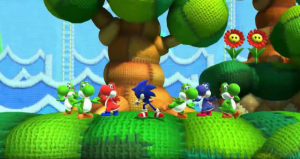 Pretty sure no one was expecting something like this. December’s Nintendo Direct announced that Sonic Lost World now has a Yoshi themed stage (combining elements from both Yoshi’s Story and Yoshi’s Island) as free downloadable content. What came as more of a surprise it’s already available right now in the E-Shop. They also teased that there will be another special DLC stage available early in 2014. They didn’t say exactly what it would be, but I think it would be safe to assume that it will be a Zelda themed stage, based off of this image below shown during the announcement. 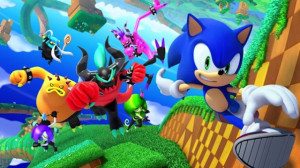 (Notice the Triforce symbol on the wall)