The crossover between Fire Emblem and Shin Megami Tensei, titled Genei Ibun Roku #FE, gets an official release date of December 26th, 2015 in Japan. The game will also have a limited edition version dubbed “Fortissimo Edition” that will include special box art, soundtrack, art book, and costume DLC code. The game will also be getting its own Wii U bundle including the Fortissimo Edition of the game. 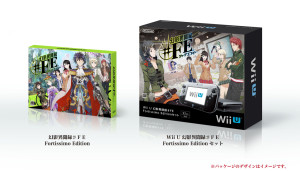 Fortissimo Edition and Wii U bundle

What are your thoughts on this?  Are you looking forward to this game? Comment below and let us know!