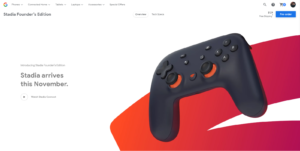 Google Stadia has just announced their first pre order bundle known as the Founder’s Edition. This will include several items that will be discussed in this article. I first want to air out the skepticism that I have heard people talking about. This service will allow you to keep the games that you already purchased, even after you decided to stop using the monthly subscription, which is a plus. Next thing on the list is that the Internet speed required is only 10 Mbps at minimum, meaning most Internet service providers offer a plan that is a very fair price for that speed. To test your internet connection, Google Stadia, can test your connection for you. Only draw back to the lowest internet speed is that you will comfortably play and stream at 720p resolution. Google Stadia recommends a Internet speed of at least 20 Mbps for 1080p and 35 Mbps for 4k. If a Internet Service Provider’s fee is still an issue, your cell phone provider’s data package will suffice. The supported minimum required operating system you need is listed here:

With all of this in mind, I think that Google Stadia is not a bad idea in the slightest. The creativity in this platform does have room to grow and develop and as time passes, it will tell if Stadia can manage to remain in the discussion of being a great source for streaming games and become a competitor to other avenues like Steam. The max frame rate and resolution that Google Stadia can output currently is 60 frames per second and a 4k resolution (granted that the user owns a 4k television or monitor). HDR support and 5.1 surround sound is also the highest it can perform.

The price to pre-order the founder’s edition will be 129 dollars and is not available to Hawaii or Guam. The items that will be included in the pre-order are:

Google Stadia Founder’s Edition will ship in November of 2019. The price of a month will be 9.99 dollars and the Stadia Base, which is coming next year, will be free but here is what the differences are.

Finally here are all of the games that will available and more according to Google Stadia, as of today, for purchase.