If there isn’t an episode of anime that made me feel more uncomfortable, but also made me laugh, it’s this one. Let me tell you guys right now, Gugure! Kokkuri-san doesn’t know boundaries. You wanna let a dog spirit hound over a small child? Let’s do it. You wanna let a fox and a dog bicker at each other like they’re protecting their own property? By all means. This is just wrong… and it might be a little illegal.

This episode, in the first half, focused on Kokkuri-san assisting Kohina in how to smile… in which she fails terribly. Much so that she cracks a window, scares off a dude in a bunny suit, and even second-guesses herself to the point where she wonders if Kokkuri-san will like her anymore if she doesn’t learn how to smile. Eventually, she ends up smiling, just a bit, only to have her face fall off (Wait… what?)

In the second half, we meet a dog spirit named Inugami, who apparently fell in love with Kohina (Mind you, she’s probably not even twelve, and this is a grown man…) whenever she picked him up when he was alive (as a dog) and then stalked her as a spirit ever since. Now, he’s bribed her with cup noodles to make a contract with him, and his efforts at winning her heart are being shot down one by one by Kokkuri-san. 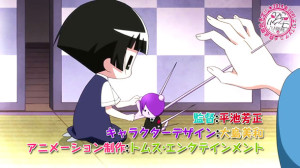 … in which Inugami lashes out violently.

He even goes as far as getting her to sign her name onto a marriage license form for the spirit world, and makes proclamations of literally engaging in sexual intercourse with her (which was bleeped out, of course) to which Kokkuri-san grinds Inugami up in a blender and let’s his pile of meat lay on the floor before he materializes into a person again. Yeah, this episode is wacky… and mildly illegal.

All in all, funny episode, even if it was incredibly inappropriate. What’d you guys think? Offended? Crying from laughing? Let us know in the comments!

One thought on “Isn’t this Kind of Illegal? Kokkuri-san (Ep. 2)”