Killer Instinct is finally back. After all this time, Rare’s IP is finally put to use.

Microsoft has just announced on-stage at E3 that a new Killer Instinct game will be launching with the Xbox One this fall. No particular details were given regarding the game, but there were two short clips of the game shown showing off some of the gameplay. You can view the official trailer here. 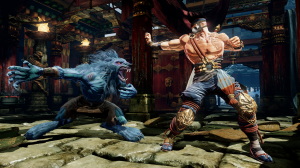 Microsoft shared a few details regarding the game – some that don’t necessarily sound too hot. The game will be “free-to-play”, but there’s a catch. The game only comes with one character (Jago) and you’ll actually have to buy the other characters individually. Very odd.

The game is also being made by Double Helix, who doesn’t necessarily have the best track record. To put their quality into perspective, these are the guys behind the Battleship move-adaption game. Yeah. Not very promising.

We’ll have more on this games as details are released.

3 thoughts on “Killer Instinct Announced for Xbox One”